A 73-year-old woman from Nebraska has called her coronavirus diagnosis a "blessing". 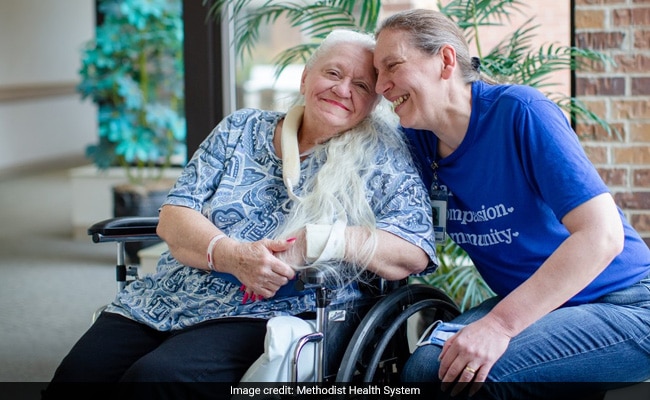 Doris Crippen and Bev Boro were reunited after 50 years.

A 73-year-old woman from Nebraska has called her coronavirus diagnosis a "blessing", for it helped her reunite with a sister she had not seen for more than 50 years. According to WWSB News, Doris Crippen was reunited with her younger sister, Bev Boro, who turned out to be a medication aide at the facility where she was recovering from COVID-19.

Bev Boro, 53, works at Methodist Health's Dunklau Gardens in Fremont, where Ms Crippen was hospitalised after breaking her arm in a fall resulting from the illness. She recognised her elder sister's name on a list of patients.

The two sisters were separated in 1967, after their father left them at home alone. Ms Boro was just 6 months old at the time.

"I seen her once when she was a baby and I held her. And the rest of my life growing up I never thought I'd find her again," said the elder sister to WCSC-TV.

Their reunion took place at the hospital, where Ms Boro used a whiteboard to communicate with her elder sister, who is hard of hearing.

"I went in with one of the whiteboards and I said to her, is your father Wendall Huffman? She goes that's my daddy, and I pointed at myself and I go that's mine, too." Ms Boro said.

"She said, 'I am your sister, Bev.' I nearly fell out of the chair, and I just burst into tears. It was just a happy feeling to find my sister. It's been 53 years since I seen her, and she was a baby," Ms Crippen added while talking about the reunion.

The women had searched for each other for years without any luck. After more than half a century apart, they are now making up for lost time.

Delhi's Chandni Chowk Is Getting A Facelift. See How It Looks Now