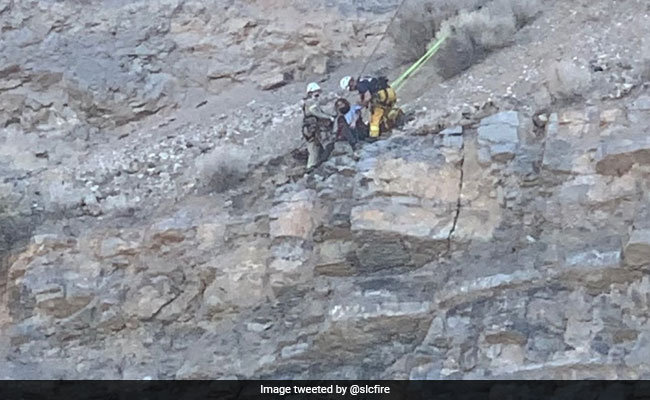 A hiker in Utah fell 100 feet down a mountain and landed onto a cliff ledge.

A hiker in Utah, USA, survived a 100-foot drop onto a cliff ledge, where he remained stranded for hours before being rescued. The 29-year-old man was hiking in an area west of Ensign Peak, located near downtown Salt Lake City, according to Salt Lake City Fire Department.

"This morning SLC Fire's Heavy Rescue Team rescued a 29 yr. old male hiking in the area that fell more than 100 feet landing on a cliff ledge," the fire department wrote in a Twitter post on Sunday.

This morning SLC Fire's Heavy Rescue Team rescued a 29 yr. old male hiking in the area that fell more than 100 feet landing on a cliff ledge. He sustained injuries to his pelvis and leg. After losing his phone he was stuck on the mountain for over 5 hours before 911 was called. pic.twitter.com/22xG2ExzAI

Fire Capt. Tony Stowe told The Salt Lake Tribune that the man tumbled down a mountain and came  to a stop just before the cliff edge. He lost his phone while falling and could therefore not call emergency services for help. He remained stranded for more than five hours on the cliff ledge before help arrived.

During this time, the man flashed his flashlight, waved his arms and yelled for help. This caught the attention of a group of homeless people who live in the area. They called 911 at about 9.30 AM, after which the fire department arrived to rescue the man, who has not been named.

A video of the rescue shows firefighters rappelling down to the stranded man. The rescue operation took two hours to complete. Watch the video below:

Here you can see crews lowering the man down the cliff side. pic.twitter.com/obxq3FqZB1

The hiker was conscious but disoriented when rescuers reached him. He suffered injuries to his pelvis and a broken leg. He was taken to a hospital for treatment.