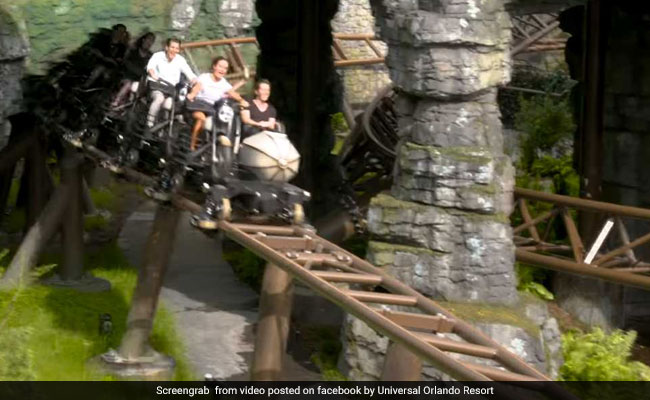 A new Harry Potter-themed roller coaster has become a huge hit in Orlando.

'Harry Potter' fans have something fantastic to rejoice about. Universal Studios Orlando in Florida has added one more iconic location from the Harry Potter universe to their Wizarding World area in the Islands of Adventure theme park. Hogwarts' Forbidden Forest - home to wise centaurs, magical unicorns and fearsome acromantulas - is now accessible to muggles through a roller coaster. The studio's new 'Hagrid's Magical Creatures Motorbike Adventure' ride opened on Thursday to a hugely appreciative response. According to Fox News, in fact, people waited as long as 10 hours to ride the new  roller coaster.

But who can blame them? According to Gamespot, the narrative-driven roller coaster does not rely on motion simulation or video elements on the ride itself. Instead, it invites Potterheads to sit on Hagrid's motorbike - complete with the sidecar - to go on a thrilling ride with a 17-foot free fall drop and seven launches. The fact that the studio planted more than a thousand real trees to achieve the look of a magical ancient forest only adds to the coaster's charm.

"It combines innovative coaster thrill moments with dark ride story moments, and the experience runs 3 minutes long, but people have been telling us it feels like a 5-minute ride just because of the diversity and thrills and story moments coming together," said Gary Blumenstein, creative director at Universal Creative, to My News 13.

Online, the response has been more than positive, with many people calling 'Hagrid's Magical Creatures Motorbike Adventure' ride well worth the time spent waiting for it.

I waited 11 hours for Hagrid's Motorbike Adventure. Was it worth it? Yes! Best coaster in Orlando? Possibly, Mako is awesome but the theming and other special features is no comparison. The roller coaster is a combination of Verbolten, Cheetah Hunt, and Wave Breaker. pic.twitter.com/46AEfaAxBI

just waited in line for 8 hours for the brand new @UniversalORL hagrid rollercoaster. to say it was worth it would be an understatement!???????? pic.twitter.com/rPf8vy1E1L

What do you think of this Harry Potter-themed roller coaster? Let us know using the comments section below.