Even 'Padhai' Can Be Fun. These Viral Videos Are Proof

These hilarious videos will make your day 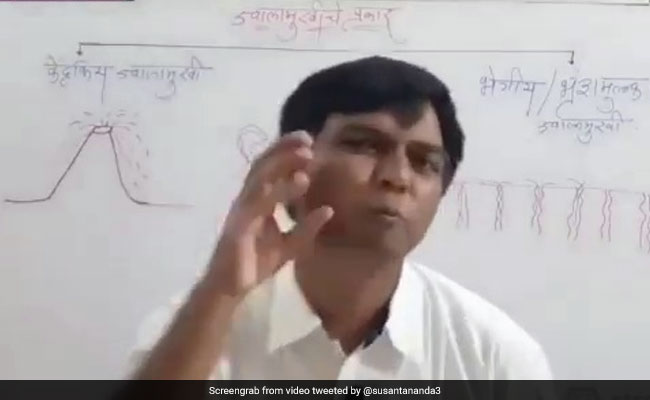 Screengrab from a video shared on Twitter by IFS Susanta Nanda.

Most of us have several fond memories of our childhood. Most of us will also agree that padhai or studying is not something we would count as a fond childhood memory. For many of us, in fact, the very mention of studying would induce dread (and protestations of fake headaches too). But several hilarious videos that have gone viral on social media over the last few days will convince you that even studying can be fun with the right teachers.

One such video was shared on Twitter user with the declaration: "This is why I left the education system" - but it has garnered a lot of appreciation on the microblogging platform. The video shows a teacher using funny mnemonics to help his students memorize the periodic table.

This is why I left the education system pic.twitter.com/k7ksCSseDV

The video has garnered nearly 90,000 views on the microblogging platform, with many praising the hilarious mnemonics used.

Another video was shared by IPS officer Arun Bothra, who praised the tutor's skills by writing: "I would have topped the UPSC If I had a teacher like him."

I would have topped the UPSC If I had a teacher like him ???? pic.twitter.com/IaCKtDe2kf

Many on Twitter identified the teacher as the man behind the popular YouTube channel 'Khan GS Research Centre' which has nearly 2 million subscribers. Several Twitter users praised his way of teaching as "fun" and "awesome".

His way of teaching is awesome.....and very informative...
Long last in memory..
Just check the whole video and then decide...
Just search the whole video on you tube (KhanbGS research centre) pic.twitter.com/Qws2uJ8xGK

Indian Forest Service officer Susanta Nanda also took to the microblogging platform to post a ROFL video which shows a teacher explaining the concept of volcanic activity. You have to watch the performance to appreciate it:

I regret not having studied under him????
Teacher teaching VOLCANO in online class.... pic.twitter.com/qdLXD9HmtN

The short clip has collected thousands of views and amused comments. "Don't think anyone would be sleeping in his class," quipped one Twitter user, while another said, "I didn't understand anything but I still enjoyed."

What did you think of these videos? Let us know using the comments section.