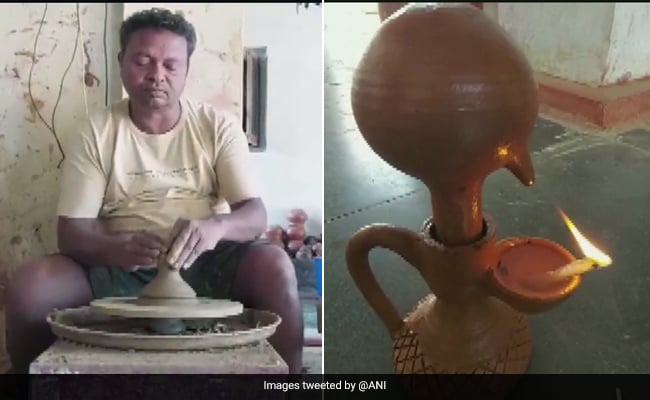 A Chhattisgarh-based potter has designed an earthen lamp that can burn for an entire day. Ashok Chakradhari, who lives in a small village named Kondagaon in Bastar District, has been flooded with orders for the lamp ahead of Diwali, reports The Better India. The potter has been trending on social media for reviving traditional lamps that can burn continuously for 24 to 40 hours.

The flow of oil is circulated automatically in the lamps made by Mr Chakradhari. The lamps, which have been labeled 'magic lamps', feature a diya, a dome-shaped reservoir to hold the oil and a tube-like structure to hold the reservoir over the lamp's base.

The idea of sculpting a lamp that can burn for hours came to Mr Chakradhari after watching a video on YouTube. "I am always on the lookout for new ideas that can challenge my pottery skills, and be a useful innovation for those around me," says the 62-year-old. "In 2019, before Diwali, I was looking for a new design to sculpt diyas. That is when I stumbled upon a lamp that carries a reservoir of oil over it and keeps refilling the base to ensure the diya does not stop burning. I found it interesting and decided to make that."

He tells news agency ANI that the technique to make the earthen lamp was perfected after watching several videos online.

He says, "I learnt making this lamp watching several techniques online. I've received a good number of orders for making more such lamps."

Chhattisgarh: Ashok Chakradhari, a potter in Kondagaon, has designed an earthen lamp in which flow of oil is circulated automatically.

Photos shared by ANI show a huge stock of 'magic lamps' designed by the potter, whose innovation has been applauded on the microblogging platform.

"So good to see this, hope people in urban India gets to buy this as well," wrote one person in the comments section.

"These were used in older times," another said.

Mr Chakradhari's Facebook page has been flooded with inquires from people across the country.

What do you think of this lamp? Let us know using the comments section.