Caught On Camera: Giant Python Fights It Out With Leopard And Her Cub 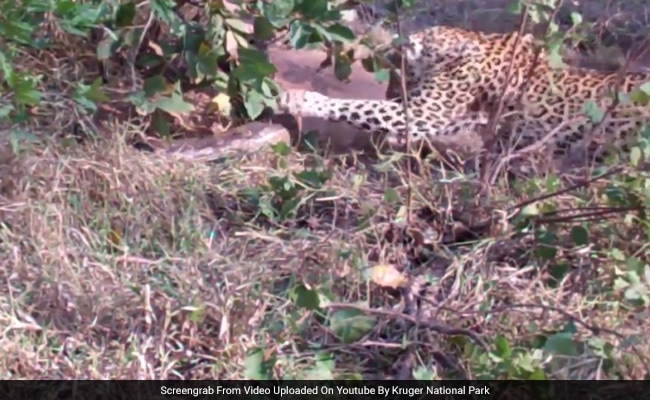 The leopard can be seen attacking the giant rock python.

A group of tourists at the Kruger National Park in South Africa witnessed a rare event when they saw a python get into a fighting match with a leopard and its cub. The dramatic video, shot by the safari-goers, shows the two leopards get into a death match with a huge rock python. When the leopard cub reaches for the snake with its paw, it launches an attack on its predator. The 8 minutes, 19 seconds long video was shot in July 2016, according to the National Geographic. It was posted online only on March 3 this year.

Rock pythons are well known for their aggression and ill-temper. True to reputation, this one strikes at the leopard cub with its mouth open. The cub manages to swat him away. The mother leopard then tries to dislodge the python from the ground, and she gets bitten in the process. Tourists can be heard ooh-ing and aah-ing in the background all this while.

The footage ends before the winner can be decided, but a description accompanying the video reads, "The interesting thing in this was watching mom after vanquishing the foe come around behind the cub, who sat intently watching the whole time, and gently push her towards the carcass... The leopards fed on the carcass and then we were told a clan of hyena came in later in the day and ate the majority of it." This statement was made by the 'video taker.'

Since being posted on YouTube, the video has collected over 2 lakh views. "Wow, that was intense!" says one commenter, while another says, "Another amazing video from Kruger! Thanks for sharing! "

You can watch the full video below:

What do you think? Let us know using the comments section below.
Comments