James, an actor and TV presenter, and Chloe, a teacher, have been married for five years 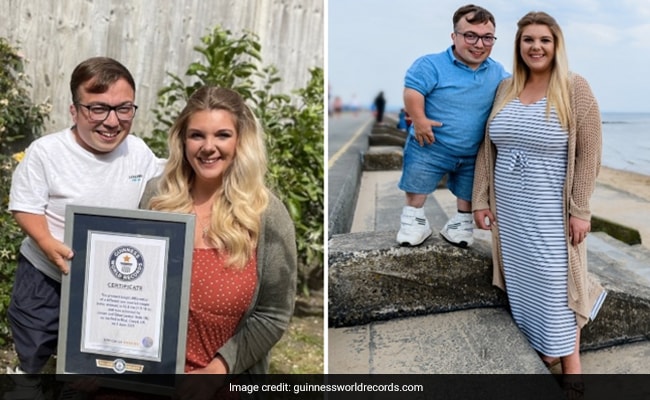 A British man and his wife have entered the Guinness World Records book as the married couple with the biggest disparity in heights. James and Chloe Lusted have nearly two feet difference in height between them. Mr James stands at 3ft 7 inches, while Ms Chloe has a height of 5ft 5.4 inches. Mr James has Diastrophic Dysplasia, a rare genetic disorder that affects bones and cartilage development. Initially, because of his condition, he doubted that he would ever get married.  Mr James, who works as an actor and TV presenter, and Ms Chloe, a teacher, have been married for five years and they have a daughter, Olivia, who is now two years old.

Except for their height, the two have a lot in common. On June 2, they broke the record for the greatest height difference of a married couple.  The Guinness World Records shared a video of the couple that showed them spending quality time on a beach with their daughter. They also spoke about their journey as a couple and as individuals so far.

The video also showed Mr James, 33, helping out Ms Chloe, 27, in the kitchen and getting onto his “adapted” car which has the pedals raised to allow him to drive smoothly. "Being 3 ft 7 is tricky sometimes. But I can do everything you can do, just in a different way," James was quoted as saying by Guinness World Records in a blog.

The couple met at a pub in 2012, shortly after Mr James had carried the Olympic torch through his hometown Colwyn Bay. Ms Chloe always liked taller men, but that changed after she fell in love with Mr James. Initially, she too had doubts about how people would react but she also believed only you could choose who you fall in love with.

"Our love story has taught us and taught others that you can't judge a book by its cover, and just to love the person no matter who they are," said Ms Chloe. Mr James has not allowed his diminutive height to come in the way of his work. According to a report in the DailyPost, Mr James was elected to Conwy Council in 2017. He is also a trustee of Disability Sport Wales and became the Welsh Conservative's first Disability Champion.

On the YouTube video, several people praised the couple for setting an example for the rest of the world. "Very sweet guy, you can see why she fell for him. He seems like he would be a great dad," one comment read. "Why can't everyone have a mindset like these people, the world would be a better place to live," Rishabh Singh, a user said.

Tell us what you think of the couple.