Gokaran Patil has won praise on social media for his artwork. 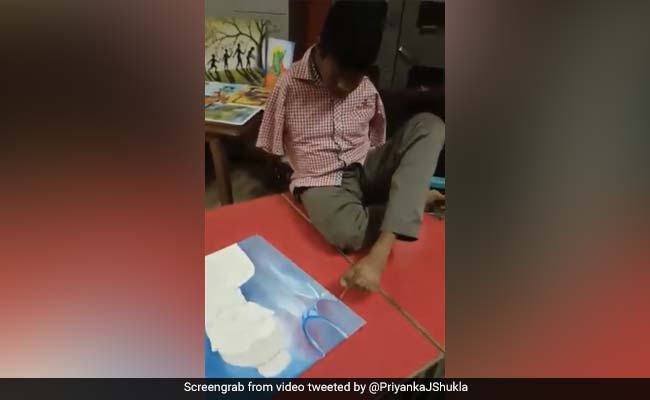 Gokaran Patil was born without hands, but he did not let that stand in the way of his dream of becoming an artist. The hearing-impaired man from Chhattisgarh learned to paint using his feet in an inspiring example of hard work and determination. Mr Patil's story was shared on Twitter this morning by IAS officer Priyanka Shukla, who praised him while giving her followers a glimpse of his artwork.

In the video shared by Ms Shukla, Gokaran Patil can be seen working on a painting, his brush gripped firmly between his toes.

"Painting in this video is Mr Gokaran Patil - an artist from Chhattisgarh. He is hearing-impaired and does not have hands - yet he is constantly moving forward with his hard work!" wrote Ms Shukla while sharing the video. She also hailed him as an inspiration for people who give up too easily.

According to DD News, Mr Patil belongs to the city of Bhilai in Chhattisgarh. His inspiring story has won hearts on social media, earning him a ton of praise. Many on the microblogging platform hailed him not just for his artwork, but also for his dedication to his craft.

Along with being an artist, Mr Patil is also trained in Computer Applications and has a Masters' degree in Fine Arts. According to news website Patrika, his work reflects the folk art and culture of Chhattisgarh and has won prizes in hundreds of art competitions.