"We're not sure what prompted this unscheduled a capella concert," wrote Yosemite National Park. 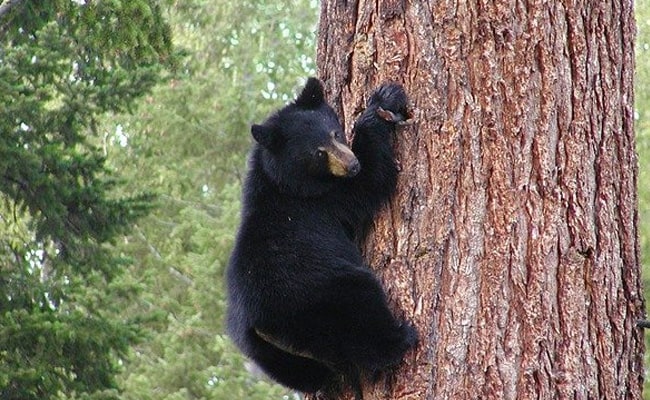 A black bear was filmed 'singing' in California (Representative Image)

A black bear was filmed giving a rare vocal performance from a tree in USA's Yosemite National Park. The National Park shared a video of the adult bear singing from the tree on Thursday. In the video, the black bear can be heard vocalising for nearly a minute.

The bear is healthy and is frequently spotted at the park. Officials are not sure what prompted it to sing from the top of a tree.

Bears can produce "a wide repertoire of sounds, typically when defensive, afraid, distressed or aggressive," park officials said while sharing a video of the impromptu "a capella concert" on Twitter.

"We're not sure what prompted this unscheduled a capella concert..." they wrote.

Check out this video of an adult male black bear vocalizing in a tree! Bears can produce a wide repertoire of sounds, typically when defensive, afraid, distressed, or aggressive. We're not sure what prompted this unscheduled a capella concert...#KeepBearsWildpic.twitter.com/2PZZtUHJHs

The video has been viewed thousands of times on the microblogging platform, and the comments section has been filled with people theorising about what prompted the vocal performance.

"Maybe he experiencing difficulty getting down -- he's looking up to the top and down to the ground," said one Twitter user.

"He sounds like me when I wake up thinking 2020 has just all been a bad dream...but slowly realize it is not," another joked.

Lynn Rogers, a biologist who has been studying bears for more the 50 years, told Los Angeles Times that it sounded like an anxiety call. "It's almost whining," Mr Rogers said. "Nothing in that is explosive."

According to Yosemite National Park's website, about 300-500 black bears live at the park.