Bizarre Sea Creatures Found On Beach Could Be Worth A Fortune

"It looked like something not of this world," said Martyn Green. 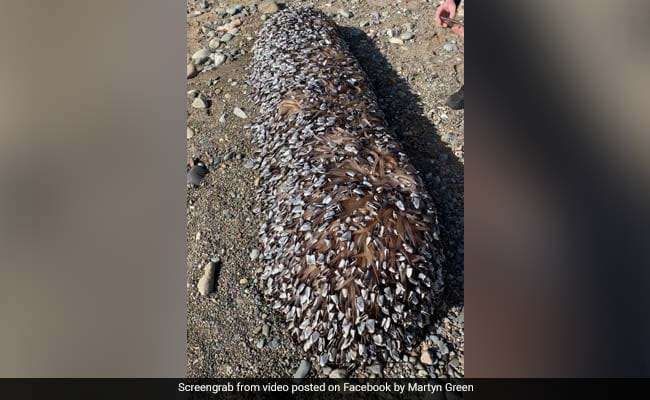 Martyn Green and his family came across a strange sight on a British beach.

Bizarre sea creatures that were found washed up on a British beach could actually be worth a small fortune. Martyn Green, 47, was on holiday with his family when they came across the strange sight on the shores of Caernarfon in North Wales. Mr Green and his family, at first, thought that it was just an odd-looking piece of driftwood. On closer inspection, however, they realised that the piece of driftwood was actually covered with thousands of tentacled sea creatures, reports The Scottish Sun.

In footage he shared on Facebook, the eerie creatures can be seen emerging from their white shells in a sight he described as "mesmerising to watch".

"My wife Gemma, she found it. We were walking on the beach and she called us and said 'come back, look at this;," Mr Green was quoted as saying by Liverpool Echo. "We went and had a look and it looked like something not of this world.

Mr Green and his son searched on Google to figure out what the sea creatures could be, and realised that they had stumbled upon Goosenecked Barnacles. These rare specimens are considered a delicacy in Portugal and Spain, where they're known as percebes and can be sold for "as much as 25 pounds a go."

"From looking on Google I think it's about 25 pounds each they go for, and on the log there were probably about 2,000 of them."

He said: "It turns out they are one of the most expensive sea creatures you can buy.

Going by that estimate, according to The Scottish Sun, the barnacle-covered log could be worth a staggering 50,000 pounds - approximately Rs 48 lakh.

Mr Green has not revealed the exact location of the strange find to ensure that opportunists can't flock to the scene and destroy it.