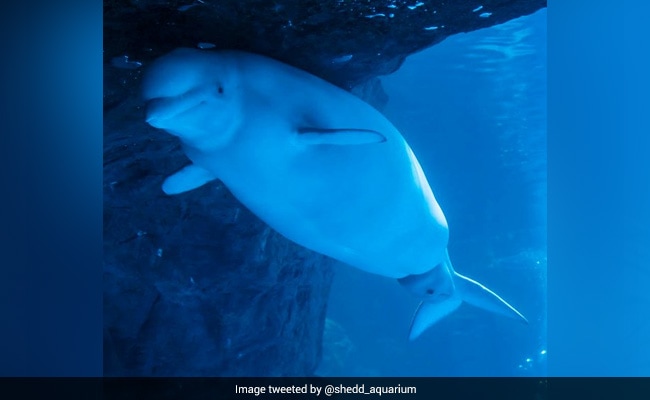 USA's Shedd Aquarium has welcomed a baby beluga whale into their family - and people across the world are celebrating the birth with them. "The Shedd Aquarium family welcomed an energetic beluga whale calf after first-time mother Bella gave birth on Friday, August 21," the aquarium, which is located in Chicago, said in a statement shared on Tuesday, adding that the calf weighs 139 pounds or approximately 63 kgs.

A remarkable video of the "atypical" birth - for the male calf was born head-first instead of fluke-first - has generated huge excitement on social media. The video was shared on Twitter by the Shedd Aquarium on Tuesday, where it has since garnered thousands of views, 'likes' and comments.

The dark grey beluga baby was born after nearly 15 hours of labour and, despite arriving head-first, immediately "powered itself to the surface".

"As the calf swam to the surface and took its first breath, it brought with it the palpable hope of new life and fresh beginnings-something we all appreciate," said Dr. Bridget Coughlin, president and CEO of Shedd Aquarium.

BIG NEWS: Bella has given birth to an energetic male calf!
The calf was born on 8/21 at 8:42 p.m. after 15 hours of labor. This was a noteworthy birth, with the calf born headfirst instead of the usual fluke-first birth.

More on the blog: https://t.co/pHDTAQ9kVbpic.twitter.com/S0iGl0IhiH

The video has been described as "magical" and "lovely" by many on the microblogging platform.

Bella the beluga whale is a first time mother at the age of 14. She will now spend some time away from the public eye, bonding with and nursing her baby.

As is often the case in the days following delivery, the calf is not yet independently nursing. The care team is in the water every three hours, assisting with feeding the calf. pic.twitter.com/bVLF0CTTwj

Beluga whales can be easily recognised by their distinctive white colour. The babies are typically dark grey in colour and turn white as they grow older.