Bear Stands Up To Sniff Hiker In Chilling Video. Watch What She Does 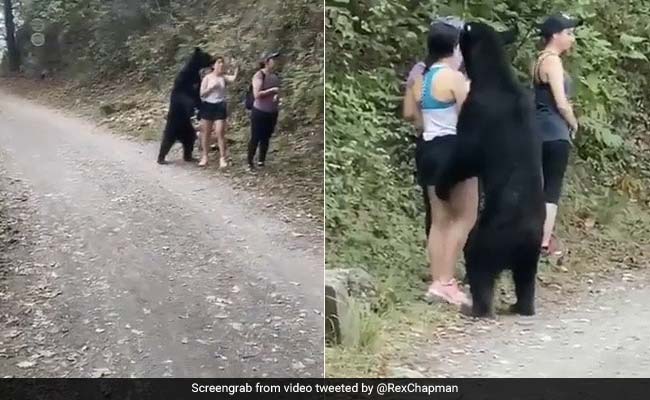 A bear was filmed approaching a group of hikers in Mexico.

A bear was filmed approaching a group of hikers and standing up on its hind legs to sniff at them curiously in a video that is going viral online. The spine-chilling footage was filmed at Mexico's Chipinque Ecological Park, reports Daily Mail.

The footage shows a woman standing still while the black bear approaches her. Two other hikers watch the scene, also standing fixed at their spots. The animal perches on its hind legs to sniff the woman's head, who, astonishingly enough, does not only manage to remain calm but also lifts up her phone to click a quick selfie with it. After inspecting the woman, the bear drops to the ground but does not move away. Instead, even as someone standing off camera shouts to discourage it, the bear attempts to bite the woman's leg and paws at her repeatedly.

Luckily, it soon loses interest and moves away from the group.

The video was shared online by Twitter and captured the Internet's attention after it was re-posted by former NBA player Rex Chapman.

This girl has nerves of steel.

She actually took a selfie with the big guy... pic.twitter.com/I3Ezyn8q7G

I want this girl in my foxhole... pic.twitter.com/4oT67HFKPg

Videos of the incident, filmed from different angles, have gone viral on the microblogging platform, collecting millions of views. Many on Twitter noted that the bear appeared to be tame and seemed more curious than aggressive. Others said the situation was still a dangerous one.

Nope. Guy in background just talking to keep everyone calm, to react to if bear gets too close. Nothing tame about the situation. Still, not at all intensely dangerous in that the bear isn't looking to hurt anyone. Just curious. Of course inherently dangerous if startled.

She did well by not running although walking away is probably not a bad idea. Nerves of steel but I'd say the bear was not aggressive. Always a great story when it ends well.

According to The Sun, this is not the first time that the black bears of Chipinque Ecological Park have approached humans. In November last year, one was filmed sneaking up behind a woman and stroking her hair.

Black bears are considered to be less aggressive than brown or grizzly bears, according to the Bear Smart Society. They often live near human settlements and are tolerant of people, rarely attacking them.