The baby rhino was taken to a rhino orphanage 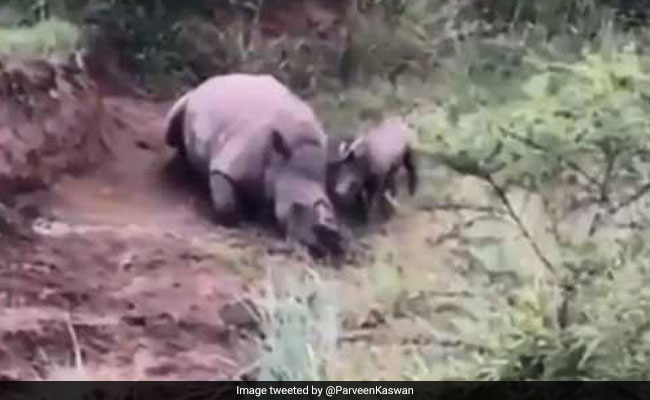 A video of a baby rhino trying to wake up its dead mother is being widely circulated online.

A video of a baby rhino trying to wake up its dead mother, killed by poachers, is being held up an example of the ugly truth of poaching wildlife. Filmed last year in South Africa, heart-wrenching video was shared on Twitter by Indian Forest Service officer Parveen Kaswan on Tuesday. It shows the mother rhino lying on the ground, lifeless, while her baby tries to wake her up desperately - at one point even trying to suckle her.

According to Mr Kaswan , the mother rhino was killed by poachers because of her horn and the baby rhino was left to fend for itself.

"The picture of poaching! A baby #rhino tries to wake #mother, who is killed by poachers for the #horn. Devastating & eye opening," he wrote while sharing the video.

The picture of poaching !!

A baby #rhino tries to wake #mother, who is killed by poachers for the #horn. Devastating & eye opening. pic.twitter.com/EnAS2PAHiD

The video has been widely shared online and has received over 35,000 views. It has also been flooded with comments, some angry and others heartbroken.

Heart wrenching. Humans are the only reason of creating imbalance of this world and this world will end only humans. Definitely Earth knows how to heal herself

What a shame! Our depravity has no bounds . https://t.co/HvXM6MINYe

According to the Independent, the mother's horn had been hacked off hours before she was found in a national park in South Africa in February 2018. The baby rhino was tranqualised by authorities and taken to a rhino orphanage, where staff named her Charlotte.

According to Save The Rhino organisation, South Africa holds nearly 80% of the world's rhinos, and had 769 poaching incidents in 2018 alone.