Judge Caught Kissing Convict Whose Sentence She Tried To Reduce 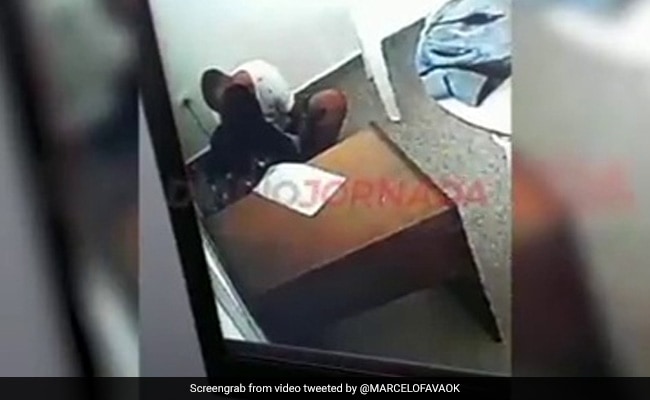 A judge in Argentina was filmed kissing a prisoner.

An Argentinian judge is being investigated after she was filmed kissing a prisoner who was convicted for killing a police officer. According to Daily Mail, judge Mariel Suarez was filmed kissing Cristian 'Mai' Bustos in jail on December 29. One week earlier, Ms Suarez, who is a judge in the Chubut province, had voted against a life sentence for Mr Bustos.

Ms Suarez was part of a panel of judges who had been voting to decide whether Cristian Bustos should be handed a life sentence for the killing of police officer Leandro Roberts in 2009. She was the only judge on the panel to vote against a life sentence, instead seeking a reduced sentence for the man who had already admitted to fatally shooting the cop. Despite her dissenting vote, Mr Bustos was handed a life term for the killing of Officer Roberts.

The judge was filmed kissing Mr Bustos in jail. An officer who spotted them reported her to his superiors, but Ms Suarez denies any wrongdoing on her part.

"I don't have any sentimental relationship with this person. I'm writing a book on him. Our relationship is a working relationship," she was quoted as saying by Argentinian news website Todo Noticias.

Ms Suarez also denied kissing the prisoner. "We were talking and felt we were being listened to. They were secret talks and there were people walking nearby and a camera and that's why we talked close-up," she said.

The Superior Court of Justice of Chubut has now opened an investigation into the judge's conduct. A statement from the court described the convict as a "highly dangerous" man.

Watch: Man Gets Chased By Mountain Lion In Scary Video