Anaconda Viral Video: The video shows people trying to drag the snake and the gator away. The incident occurred in Brazil. 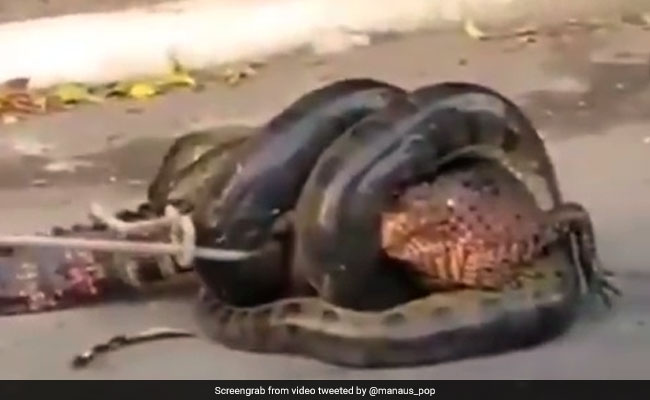 Anaconda Viral Video: An anaconda was filmed trying to swallow an alligator.

An anaconda was filmed trying to swallow an alligator in Brazil in a video that has gone viral online. Horrifying footage captured in the Ponta Negra neighbourhood of Manaus shows the snake wrapped around the alligator, trying to swallow it whole.

According to local news website Portal Marcos Santos, the incident actually took place on August 7 in a condominium, though the video went viral on social media only recently. The footage shows residents of the neighbourhood trying to drag the two reptiles away by tying a rope around them.

Dernando Reis, a resident of the condominium, said in an interview that he was arriving home when he found the snake tangled up with the gator, reports Socientifica. He saw people dragging the two reptiles away from the condo and into a street in an attempt to save the gator.

The intervention of the people eventually succeeded in separating the snake and the alligator. Witnesses said that the anaconda was over six feet in length. It reportedly gave up the attack after being dragged to a stream and the two animals soon returned to the forest from which they have come out.

The footage has gone viral online, collecting thousands of views and comments. While many said the video captured the stuff of nightmares, others citicised the condo residents for interfering and not letting nature take its course.

"Why did these people interfere with nature?" asked one Twitter user, while another said: "Someone explain the importance of respecting the food chain to these people."

Anacondas are a group of large snakes found in South America. They are some of the largest snakes in the world.