Read inOther Languages
This Article is From Oct 05, 2020

According to NASA, a supernova is the explosion of a star - the largest explosion that takes place in space. 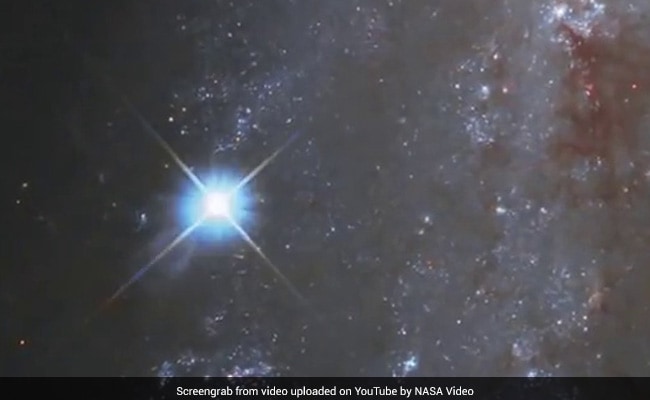 NASA has shared a stunning time-lapse video of an exploding star, captured by its Hubble Telescope. The 30-second clip shows a fading supernova in a galaxy located 70 million light years away. "Like intergalactic paparazzi, NASA's Hubble Space Telescope captured the quick, fading celebrity status of a supernova, the self-detonation of a star," the space agency wrote in a statement.

A supernova is the explosion of a star - the largest explosion that takes place in space.

Photos of the stellar blast in the barred spiral galaxy NGC 2525 were compiled into a time-lapse sequence. The photos show the fading light of supernova 2018gv.

While Hubble did not record the initial blast of supernova 2018gv, it took consecutive photos of the fading star for nearly one year. The photos taken between 2018 to 2019 were compiled into a time-lapse sequence and shared online by NASA earlier this month. At its peak, the exploding star was as bright as 5 billion Suns.

In the sequence, the supernova appears as a blazing star in the galaxy's outer edge before fading into oblivion. Take a look at NASA's time-lapse below:

Since being posted on YouTube, the time-lapse of supernova 2018gv has been viewed more than 4 lakh times. "Spectacular," wrote one person in the comments section. "It's cool to think that a star might die now but we will only see it in a million years or so," another remarked.

According to NASA, Hubble began observing SN 2018gv in February 2018, after the supernova was first detected by amateur astronomer Koichi Itagaki a few weeks earlier.