The picture is "pawsitively" adorable 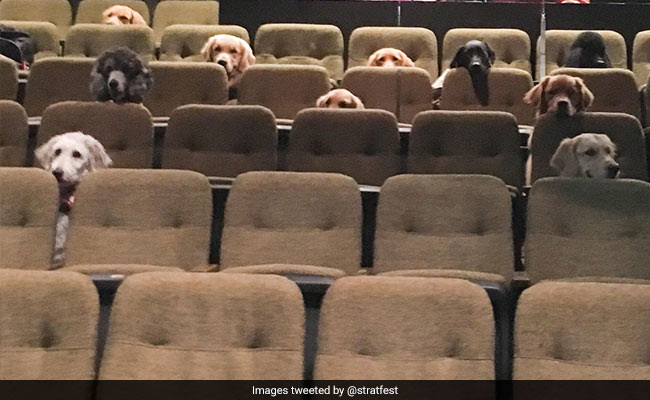 Dogs at the Stratford Festival enjoy a production of 'Billy Elliot'

An adorable photo of service dogs sitting in a theatre has charmed the Internet. The pic, which looks like it could be right out of a delightful movie about dogs, shows the group of pooches sitting in the Canadian theatre, enjoying a production of Billy Elliot at the Stratford Festival. It was clicked last week and shows the dogs occupying four rows of the theatre - with some of them even watching the performance through the cracks of their seats.

The picture of the "pawsitively adorable" audience was shared on Twitter by Stratford Festival on Thursday. Along with a thousand 'likes', it has also collected a ton of responses from people going "aww" over the dogs.

ICYMI: We had some pawsitivly adorable audience members from K-9 Country Inn Service Dogs during last weeks Relaxed Performance of #sfBillyElliot. Our Next Relaxed Performance is #sfNeverending on October 2nd. https://t.co/xaBwx65W8Jpic.twitter.com/otyNjm5pUS

But while the picture may be charming, it turns out the dogs were on a serious mission. According to CBC News, the dogs are all training to be service animals, and attending theatre was part of their training.

"It's important to prepare the dogs for any activity the handler may like to attend," Laura Mackenzie, owner of K-9 Country Inn Working Service Dogs, who led the Stratford Festival outing, said to CBC News.

"The theatre gives us the opportunity to expose the dogs to different stimuli such as lights, loud noises and movement of varying degrees. The dogs must remain relaxed in tight quarters for an extended period of time."

Ann Swerdfager, a spokesperson for Stratford Festival, described the dogs as "extremely well-behaved."

"About a dozen dogs came to our relaxed performance, and they were all extremely well-behaved," she said to CBC News. "I was in the lobby when they came in, then they took their seats, then got out of their seats at intermission and went back - all of the things we learn as humans when we start going to the theatre."

What do you think of the pic? Let us know using the comments section.