"That is one of the weirdest things I have ever seen," wrote one viewer. 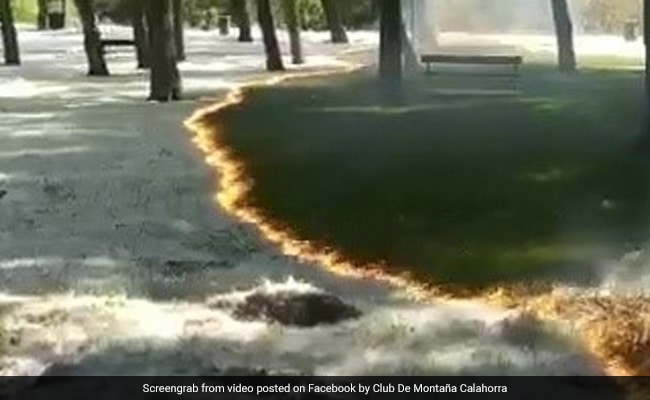 A fire burns away poplar fluff at a park in Spain.

A baffling video that has gone viral with millions of views on social media shows a fire sweeping through a park. What has left viewers surprised is the fact that the fire appears to burn away only a white film on the ground, miraculously leaving trees and grass untouched.

Filmed in Spain, the video was first shared on Facebook by a non-profit organisation named Club De Montana Calahorra. According to local news outlet Cope, it was captured at a park in Calahorra, and the white 'film' is actually seeds from the poplar tree covering the whole ground.

In the video, the fire burns away the poplar fluff to reveal green grass underneath. Remarkably enough, it doesn't set any of the trees or the grass aflame. Even a bench in the park remains untouched by the fire.

On Twitter, the mesmerising footage has collected a whopping 6.8 million views, along with thousands of amazed comments.

That is the most well-behaved fire I've ever seen.

That is one of the weirdest things I have ever seen.

The mayor of Calahorra also took to the microblogging platform to clarify that contrary to certain reports, the fire was not controlled. "No, in the Cidacos de Calahorra park there is no "controlled burning" of poplar fluff," wrote Elisa Garrido, adding that these fires are dangerous and spread quickly.

In this particular case, according to local reports, no injuries or property damage were reported because of the fire. Thanks to the intervention of firefighters, the fire was quickly extinguished.

What do you think of this footage? Let us know using the comments section.