The blaze erupted in Mandala, a slum-dominated area in the eastern suburb, around 2.45 pm, they said. 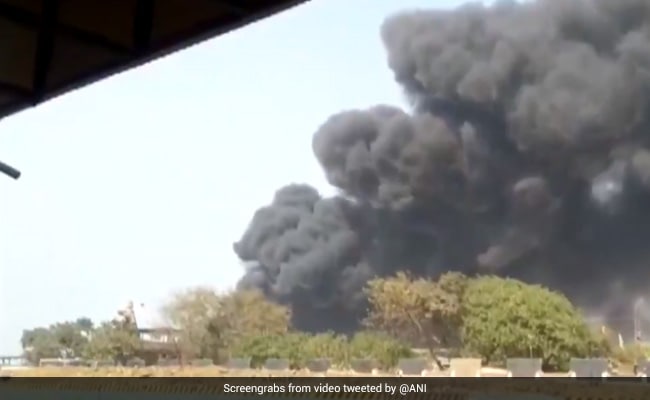 A major fire broke out at a scrapyard in suburban Mankhurd on Friday, in which a 40-year-old fire brigade officer suffered minor injuries during the firefighting operation, officials said.

The blaze erupted in Mandala, a slum-dominated area in the eastern suburb, around 2.45 pm, they said.

"The fire broke out in the scrapyard, where several things like plastic objects, tins and wooden material were kept. It was tagged a ''level-3'' (major) fire," a fire brigade official said.

Sixteen fire engines, 11 water tankers are engaged in the firefighting operation, which is still on, he said.

#WATCH I Maharashtra: A fire has broken out at a godown in Mankhurd area of Mumbai; no injuries reported so far. pic.twitter.com/LtaRkvaVty

"Station officer of fire brigade Harish Nadkar suffered minor injuries during the firefighting operation and he was rushed to Shatabdi Hospital at Govandi. His condition is stable," the official added.

There are several scrap godowns in Mandala area, which is located close to the dumping ground.

"Efforts are being made to ensure that the fire does not spread to nearby hutmets," she said.

The place where the fire broke out is located on the Mumbai suburban district collector's land, she said.

"Complaints had been registered with the collector office by the civic body's K-West ward officer and local corporator from time to time about the illegal storage of oil barrels at the place," Ms Pednekar said.

"Even action had been taken against in this connection with the help of Brihanmumbai Municipal Corporation (BMC) and the police in the past, but the local land mafia again set up their dens as soon as the authorities returned," the mayor said.

According to the fire brigade, a fire is tagged level-3, when at least 12 fire engines are engaged in firefighting.

There are a total of five levels of fire and ''Brigade call'' is the highest level of emergency, the officials said.

Idli Seller Killed By 3 Customers After Argument Over Rs 20: Police