The clip from Rajawadi hospital, shows a body on a bed in a ward; a woman is seen sitting on the adjacent bed with a mask. 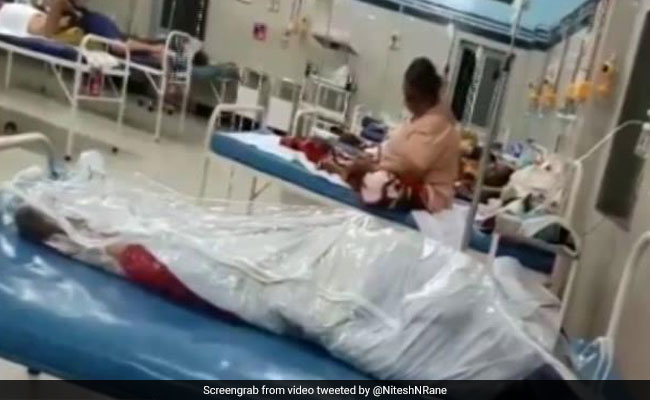 A video shared on social media that shows a body kept on a bed in a hospital's ward in Mumbai is "being verified", the city's civic agency - the Brihanmumbai Municipal Corporation or BMC tweeted this morning, adding that the "incident is being taken very seriously". Criticising the civic agency that runs the hospital, the BJP MLA Nitesh Rane tweeted the clip on Sunday.

The clip from Rajawadi hospital, shows a body - packed in a body bag - on a bed in a ward; a patient is seen sitting on the adjacent bed with a mask. "This is from Rajawadi hospital! What has really changed or we should just lose hope completely!!" BJP's Nitesh Rane wrote in his tweet, which was shared over 3,800 times since he posted it on Sunday. The post sparked strong reactions on Twitter as several users questioned the lack of proper facilities in the city's hospitals.

This morning, the BMC wrote on its official Twitter handle: "BMC is taking the incident at Rajawadi Hospital very seriously. While authenticity of the video is being verified, administration is taking all precautions to prevent recurrence of any such incident. We are working hard to ensure proper healthcare is provided to all..."

In another tweet, the civic body added, "As per GoM guidelines, bodies of deceased are to be handed over to kins 30 minutes after death, documentation & formalities for which can cause some delay. This, however, does not justify the unfortunate incident & we are committed to ensure that it doesn't get repeated."

Maharashtra Association of Resident Doctors's general secretary Deepak Mundhe also issued a statement, hitting out at Nitesh Rane. "I feel pity on such political leaders who aren't aware or not ready to understand the grave situation we all are going through. I plead to journalists, particularly younger generation, to report on the battlefield without giving unnecessary attention to such leader. Packed bodies don't spread infection though," the statement read.

This is not the first time that Nitish Rane has attacked the BMC. Last week, he had tweeted another video, claiming that some bodies were lying on roads. "This is the situation in Mumbai! Dead bodies r lying around on the roads..no ambulance comes even after u call the BMC n the police r helpless!! Mumbai has become a Graveyard now!," he wrote.

In another post, he shared a video and wrote: "Video shot this afternoon in shatapdi hospital where there r dead bodies still kept around in the ward..this man has been waiting 2 get treated but no 1 bothers to even check him..r they waiting for him to die? Maha Gov n @mybmc have lost trust totally!! Bloody liars!! (sic)"

The controversy comes at a time when the Maharashtra is fighting coronavirus. The state has the highest number of coronavirus cases in India, Mumbai is the worst-hit city.

Flying To Mumbai? New Maharashtra Rules You Need To Know