Rohit and Mahadeb and nine other students from a backward belt were sent to Kolkata to South Point School, considered among the most elite English medium schools in the city. 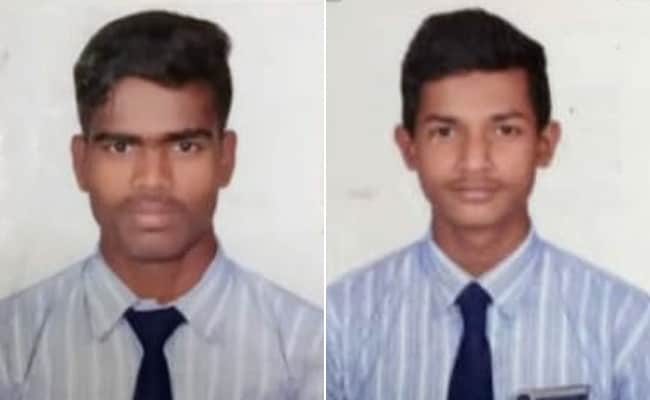 Mahadeb Bagal (left) got 83.6 per cent and Rohit Mandi scored 74 per cent

Kolkata's well-known South Point School's most recent claim to fame was that Nobel-winning economist Abhijit Banerjee was an alumnus.

Today, the school is equally proud of its latest achievement. Two students, who took their Class 10 boards this year, have scored very good marks. 18-year-old Mahadeb Bagal got 83.6 per cent and Rohit Mandi scored 74 per cent.

However, South Point usually does much better than that. In fact, its topper got a whopping 99.4 per cent in the CBSE examinations this year.

So what's the big deal?

For an answer to that, you have to travel 209 km west of Kolkata to Belpahari. That's where Rohit comes from. And Mahadeb is about 25 km away, from Gidhni. This is the heart of Bengal's tribal belt, the famed Jangalmahal which was also the hotbed of Maoist activity when the two boys were growing up.

Rohit's father is a bank employee. Mahadeb's father is a daily wager. The two were classmates at the Belpahari SC School in Class 6 in 2015 when their lives underwent a tectonic shift.

Under instruction of Chief Minister Mamata Banerjee, Rohit and Mahadeb and nine other students from this backward belt -- including 4 girls -- were sent to Kolkata, a city none of them had visited before, to South Point School, considered among the most elite English medium schools in the city.

"I couldn't frame sentences in English," said Rohit, "So I really struggled with history and geography."

"I could understand (English) words but not speak," said Mahadeb. "It was really difficult."

The boys stayed at a government-run hostel for Scheduled Caste/Scheduled Tribe children at Salt Lake. The government organised language and other subject tuitions for them. Class 7 was a struggle. But by Class 8, the boys were on an upward trajectory in their battle with the Queen's language. And they won.

Mahadeb got a smashing 91 per cent in English in his boards and Rohit got 83 per cent.

Both the students -- Mahadeb is 18, Rohit will be 18 soon -- will continue to study at South Point in Class XI and XII. Both had wanted to study science. Mahadeb wanted to become a computer engineer. Rohit wants to become an IAS officer. They couldn't find a seat in the science stream and were counselled by teachers to take up commerce.

The coronavirus pandemic has meant the two can't return to school just yet. So they are taking online classes. Internet connectivity is a bugbear. Rohit still manages while Mahadeb has a tough time. Electric supply is such a problem where he lives, his phone often runs out of battery and the connectivity is so poor, he walks around his home, sometimes for a couple of kilometres to find a usable internet link.

No wonder, then, that South Point School is very proud of the two boys. They excelled at mathematics, Bengali and English. Their forte was athletics. Both the boys became icons of envy of the city-bred students who just couldn't compete.

"There were concerns about how the boys would adjust at South Point," said Principal Rupa Sanyal Bhattacharya, "because children can be cruel sometimes. But we played up their strengths, their successes in athletics and teachers kept an eye out on any attempt at bullying. There were really none."

Mahadeb and Rohit joined the school rowing club and performed very well. They plan to continue with rowing in Class 11 and 12.

"We had no problems in school. Students and teachers were very supportive," the boys said.

Meanwhile, Mahadeb also writes poetry. Rohit said, "His poetry writing is excellent and anyone who he shares them with is so impressed."

Rohit likes playing cricket. He even enrolled in a Cricket Academy founded by former cricketer Sourav Ganguly in Salt Lake. But his parents were unable to continue to pay the fees. So that has stopped.

But both the boys are excited about their future and hope others also get as lucky as they have.

The experiment to pluck the tribal students out of their usual milieu and give them opportunity to compete with the best has clearly worked.

Nobel Laureate Abhijit Banerjee would be proud of them.