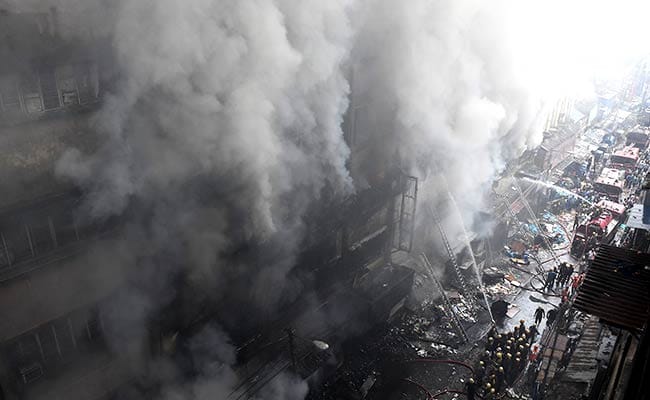 The fire that engulfed the famous Bagri Market in the central part of the city early on Sunday is still raging, with firefighters saying it may take several hours to control the blaze.

Thirty-five fire tenders were pressed into service as the blaze spread to other parts of the market, in congested Canning Street. Firefighters tried to control the blaze by spraying water on the building from six directions.

A senior police officer, who visited the area, said the situation has improved today and firemen are still working to tame the flames. It may take several hours more to fight the fire, a senior official of the fire department told PTI.

"Almost the entire building has been engulfed in the fire, because a huge amount of inflammable materials stored inside the shops helped spreading it.

"Most of the shops are closed with shutters locked due to which we are facing a tough time to reach crucial points. Despite the problems, we are fighting to the best of our abilities to douse the fire," the fire department official said. Firefighters on Sunday had a tough time bringing in fire tenders and other equipment inside the congested area. They had to cut innumerable overhead tangled wires to bring in one hydraulic ladder to fight the fire.

The fire personnel also sprayed water on the adjacent buildings, to control the fire from spreading to neighbouring buildings.

Firemen faced difficulties with scarcity of water in the area as water was supplied from a water body in nearby Laldighi and Hooghly river in Mallickghat.

"Water scarcity is a problem here. If there was a water supply from this area we could have fought the fire in a much better manner. Supplying water has been a problem as it is brought from nearby supplies," another official of the fire department present at the site said.

The fire which broke out around 2.30 am Sunday gutted at least 1,000 business establishments inside the G+5 market causing huge losses to traders ahead of the Durga puja festival.

No loss of life has been reported but six persons, including two fire fighters, fell sick after inhaling the toxic smoke, the police said.

The sick persons were treated at the Calcutta Medical College Hospital and later discharged.