Approximately 42, 933 people cleared the test this year, taking Kerala closer to its aim of 100 per cent literacy. 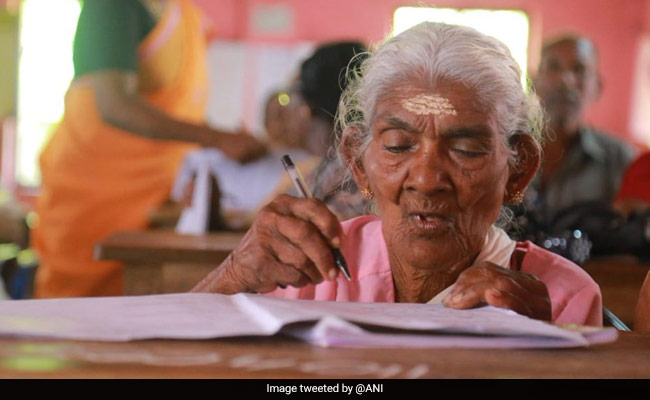 A 96-year-old woman has cleared a test under Kerala's literacy programme with flying colours, scoring 98 per cent marks. She was the oldest candidate to take the test under the programme, launched to eliminate illiteracy in the state that boasts of over 90 per cent literacy, the highest in the country.

Karthiyani Amma of the Alappuzha district scored 98 out of 100 marks in 'Aksharalaksham' literacy programme test of Kerala State Literacy Mission. In the exam, her reading, writing and basic mathematical skills were tested.

Approximately 42, 933 people cleared the test this year, taking the state closer to its aim of 100 per cent literacy.

On April 18, 1991, the state was declared fully literate, which means attaining 90 per cent literacy, as per UNESCO norms. Even though the state is the flag bearer of literacy in the country, around 18 lakh people remained illiterate, the 2011 Census revealed, prompting the state government to launch the "Aksharalaksham" programme on January 26 this year.

The motto of the program is to eradicate illiteracy among marginalised communities like tribals, fisher folks and slum-dwellers.

"Our motto is to eradicate illiteracy completely and achieve 100 per cent literacy in the state by all means," Literacy Mission director PS Sreekala had said before the programme was launched.