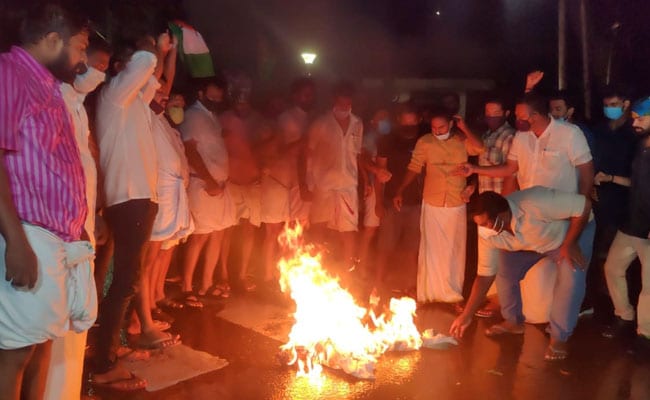 BJP and Congress protested and demanded the resignation of KT Jaleel

The Kerala units of the Congress and BJP, with their affiliated organisations, protested outside the Secretariat in Thiruvananthapuram and other parts of the state late Friday night, hours after Higher Education Minister KT Jaleel appeared before the Enforcement Directorate.

Opposition leaders in the state - both from the Congress and BJP - demanded the resignation of Mr Jaleel. State government sources said KT Jaleel had been summoned by the ED and appeared at their office on Friday.

This comes at a time when multiple central agencies are probing the smuggling of at least 30 kg of gold through diplomatic channels.

In July, call records leaked to the media showed multiple calls exchanged between the minister and one of the accused - Swapna Suresh.

At that time Mr Jaleel told the media he had spoken to Ms Suresh, as directed by the UAE Consulate General, in connection with sponsored food kits for families in need during Ramzan.

He has also, in the past, referred to consignments involving Qurans from the UAE Consulate transported within Kerala with his knowledge. Customs has been probing these aspects.

Mr Jaleel had earlier welcomed any probe, saying he had not done anything wrong.

"This is the first time a minister has been questioned by the Enforcement Directorate in the state. He must resign on moral grounds," the Congress's Ramesh Chennithala, who is also Leader of the Opposition in the state Assembly, told the media.

"Why is Kerala Chief Minister Pinarayi Vijayan protecting his minister, who has been questioned in connection with the gold smuggling case. This is serious. We demand his resignation," K Surendran, chief of Kerala BJP, said.

Faced with these protests Mr Jaleel posted on Facebook, writing: "Truth shall prevail... Only truth will prevail. Even if the whole world opposes, nothing else will happen".

There was no direct response from the minister on this issue, despite several attempts at contacting him.