BJP MP Shobha Karandlaje had tweeted about Hindu families in a panchayath in Malappuram allegedly not being given water as they supported the new citizenship law, a claim which was widely shared on social media and even reported by a few media houses. 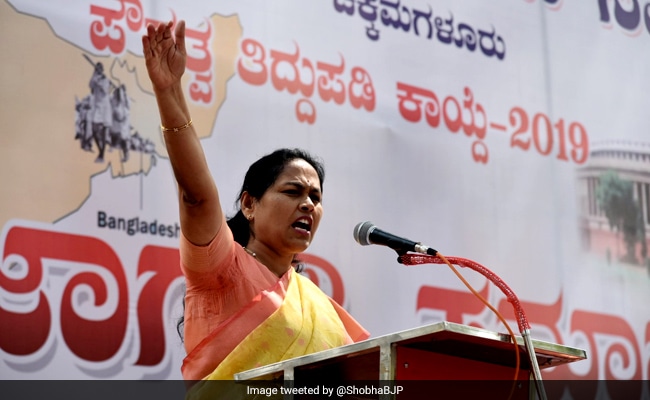 Shobha Karandlaje is the BJP MP from Karnataka's Udupi-Chickmagalur.

A case has been registered against Karnataka BJP MP Shobha Karandlaje and others by Kerala Police for a tweet alleging that Hindu families in the state's Malappuram district are not being given water because they supported the Citizenship (Amendment) Act or CAA.

Ms Karandlaje, the parliamentarian from Udupi-Chickmagalur, had tweeted about Hindu families in Kuttipuram panchayath of Muslim-dominated Malappuram allegedly not being given water as they supported the new citizenship law, a claim which was widely shared on social media and even reported by a few media houses.

Kerala is taking baby steps to become another Kashmir!

Hindus of Kuttipuram Panchayat of Malappuram was denied water supply as they supported #CAA2019.#SevaBharati has been supplying water ever since.

Will Lutyens telecast this intolerance of PEACEFULS frm God's Own Country!? pic.twitter.com/y0HKI4bitD

The First Information Report (FIR) has been registered for allegedly promoting enmity between different groups on grounds of religion, race, place of birth, residence, language, based on a complaint by an advocate practicing in the Supreme Court. A case has also been taken against activists of Seva Bharati, an NGO linked to the Rashtriya Swayamsevak Sangh (RSS), the ideological mentor of the BJP.

According to the police, there has been water crisis in the area for almost a year.

"The panchayat has not been able to provide water since almost a year due to borewell issues. A private borewell was used to supply water, but they stopped the supply because they got a warning from Kerala State Electricity Board saying the motor usage is for electricity purpose and if used for other purpose, will be disconnected," police officer Aravind said.

Reacting to the case against her, Ms Karandlaje said she tweeted based on information provided by a source on the issue of water crisis.

"I have tweeted according to the information by a source, Our Seva Bharati team had supplied water to the people of the particular place. Why cannot the government do it? Let them book the case," she told ANI.

"Instead of acting against the discrimination happened to the Dalit families of Cherukunnu, they lodged a case against me (sic)," the BJP leader tweeted.

Kerala's ruling Left slammed the BJP.  "This is some kind of a malign campaign by the BJP to tarnish the state of Kerala and the people of Kerala. As far as Malappuram is concerned, they (people) are famous for communal amity," A Vijayaraghavan, a senior Left leader said.

"As far as BJP is concerned, they have minimum support here It's a false propaganda, it will not happen in Malappuram," he added.