Will Face December 5 Karnataka Bypolls To 15 Seats With Unity: Congress

A meeting of senior Congress leaders was convened by the party's state unit in Bengaluru to discuss the bypolls and the candidates. 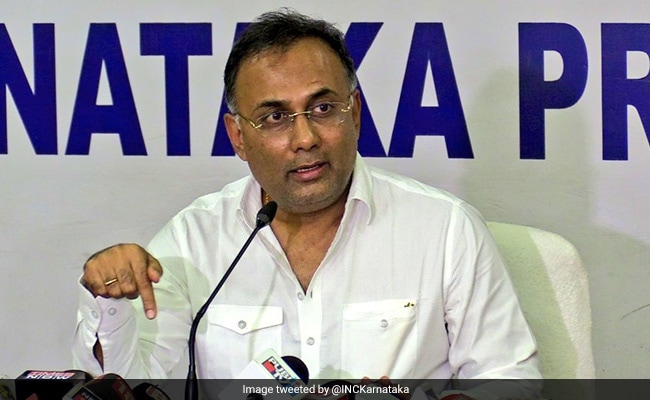 Dinesh Gundu Rao said party confident that disqualified MLAs case will be in their favour.

Amid talks of differences within the party, Congress leaders in Karnataka on Monday said they resolved to face December 5 bypolls to 15 assembly seats in the state with "unity".

The list of candidates for the remaining seven constituencies has almost been finalised and would be declared after the Supreme Court verdict on the disqualified MLAs case, which they hoped, would give a ''favourable'' verdict.

A meeting of senior Congress leaders was convened by the party's state unit in Bengaluru to discuss the bypolls and the candidates.

The meeting also saw leaders expressing strong reservations against taking in disgruntled leaders from the BJP into the party.

"Senior party leaders met today and discussed about the bypolls. Looking at the court order on November 13, we will finalise the candidates for remaining seven seats," KPCC chief Dinesh Gundu Rao said after the meeting.

He told reporters here that the discussions took place in a "cordial atmosphere" and leaders decided to set aside their differences and jointly face the polls.

Mr Rao said the list cannot be considered final until it comes from the AICC and added that they had decided on probable candidates in most constituencies, except in one or two, where further discussions were needed.

In general there was more or less unanimity on selection of candidates, he said.

However, according to sources some senior party leaders expressed displeasure about not everyone being taken into confidence on selection of candidates.

When CLP leader Siddaramaiah asked senior leaders to take responsibility of a constituency each, some reportedly voiced discontent about their opinion not being considered while deciding candidates and "unilateral decisions" being taken.

Congress has already announced a list of candidates for eight out of 15 seats that will go for the December 5 bypolls.

Adding credence to the speculation about differences emerging at the meeting was senior Congress leaders KH Muniyappa and BK Hariprasad leaving early.

The KPCC chief however brushed aside questions of discontent among leaders, saying there was nothing of the sort and discussions at the meet were held peacefully and all present expressed their opinion.

Clarifying on KH Muniyappa and BK Hariprasad leaving the meeting early, he said it was the guesswork of the media and not the truth.

"They participated in the meeting, after which they left. As there are municipality polls in Kolar (Muniyappa's home district) he had to leave urgently, that''s all. Unnecessarily don''t misrepresent."

He said discussions were held on candidates for the coming bypolls and opinions were shared.

"We have to see to that party wins all the 15 seats..We have given our own suggestions."

KH Muniyappa replied in the negative when asked whether there was disgruntlement about candidates already selected for eight seats, saying they had given their suggestions and brought to the leadership''s notice who are the winnable candidates.

At a recent party meeting, KH Muniyappa and BK Hariprasad had hit out at CLP Leader Siddaramaiah and Dinesh Gundu Rao for their "unilateral style of functioning" and accountability not being fixed for he party''s debacle in Lok Sabha polls.

To a question, Mr Rao said he was 100 per cent confident that the Supreme Court judgment on disqualified MLAs that is likely on November 13 "will go in our favour" and the party would also win the maximum number of seats in the bypolls.

Bypolls to 15 of 17 seats represented by disqualified MLAs, whose resignation and absence from the trust vote led to the fall of the Congress-JD(S) coalition government, and made way for the BJP to come to power, will be held on December 5.

Meanwhile, state Congress on Monday held protest in front of Town Hall in Bengaluru against the "anti public policies" of both state and central governments.

In a memorandum to the President, submitted through the Deputy Commissioner, Congress requested him to intervene and direct the government to work towards improving the economy, solve unemployment, among other issues.