Claiming that the JDS-Congress government has lost people's faith after losing 26 seats in Karnataka's Lok Sabha constituencies, BS Yeddyurappa said despite this the coalition partners have decided to run the government, which was against the verdict of the people. 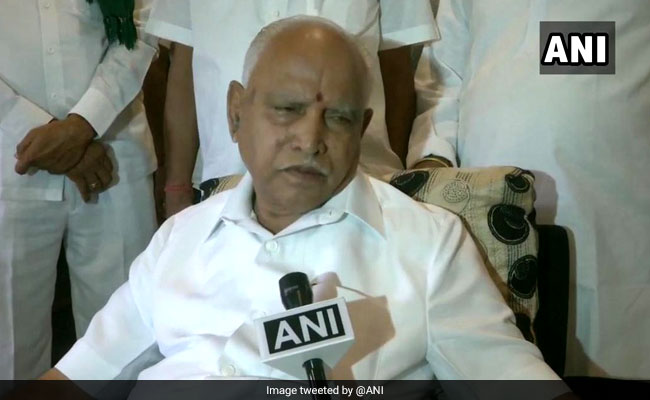 Amid speculation that JDS-Congress coalition may collapse following its drubbing in the Lok Sabha polls, Karnataka BJP Chief BS Yeddyurappa Sunday said his party favoured fresh assembly elections in such an event, ruling out partnering with the regional party to form a new government.

"Forming a government with JDS help is an impossibility. I have had a distasteful experience of 20-20 rule under Mr Kumaraswamy's chief ministership.

I do not want to repeat the mistake again," Mr Yeddyurappa told PTI in an interview.

The BJP had to withdraw support to the Mr Kumaraswamy led government as the JDS leader refused to step down as per 20-20 power sharing deal in 2007.

Responding to a question, Mr Yeddyurappa said the party is ready for fresh state elections.

"We are ready for fresh assembly elections. There is no option left for our party," he said.

Claiming that the JDS-Congress government has lost people's faith after losing 26 seats in Karnataka's Lok Sabha constituencies, he said despite this the coalition partners have decided to run the government, which was against the verdict of the people.

He also alleged that the coalition partners have buried the hatchet just to remain in power, instead of solving people''s problems including, drought and drinking water across the state.

To another query, the senior BJP leader said the party has convened a meeting on June 1 to chart out the next course of action.

Asked if the BJP would welcome Sumalatha Ambareesh, who defeated Kumaraswamy's son Nikhil Kumaraswamy in Mandya Lok Sabha constituency, into the party, Mr Yeddyurappa said if Sumalatha wants to join his party, she was welcome to do so.

"Sumalatha told us that she would talk to the people of Mandya and decide on joining BJP," he added.

The Congress and JDS formed a coalition government in the state after the May 2018 assembly elections threw up a hung verdict.

Congress and JD(S) ended up winning only one seat each in the Lok Sabha elections dealing a blow to the one-year-old coalition.