Karnataka Crisis: Visuals showed the lawmakers having dinner and then settling down for the night in more casual clothes. 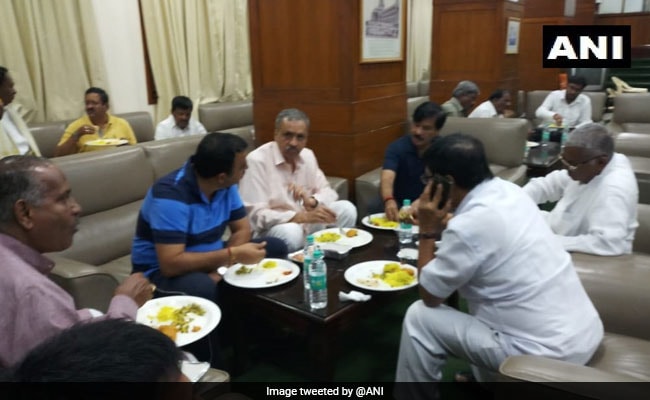 Karnataka BJP lawmakers had dinner in the assembly and slept on its green carpeted floor at the end of a dramatic day at the Vidhana Soudha on Thursday. The BJP was protesting what it called the Congress-Janta Dal Secular coalition's refusal to take a trust vote at the earliest. Despite the political stand-off, political Deputy Chief Minister G Parameshwara of the Congress arranged food for his BJP colleagues.

"It is our duty to arrange food and other things for them. Some of them have diabetes and blood pressure conditions. So, we have arranged everything for them here. Beyond politics we're friends, it is the beauty of democracy," Mr Parameshwara was quoted as telling news agency ANI.

Visuals showed the lawmakers having dinner and then settling down for the night in more casual clothes. Some were seen with bed clothes and pillows delivered from their homes.

Photos showed Karnataka BJP leader BS Yeddyurappa sleeping in what appeared to be the centre of the house. 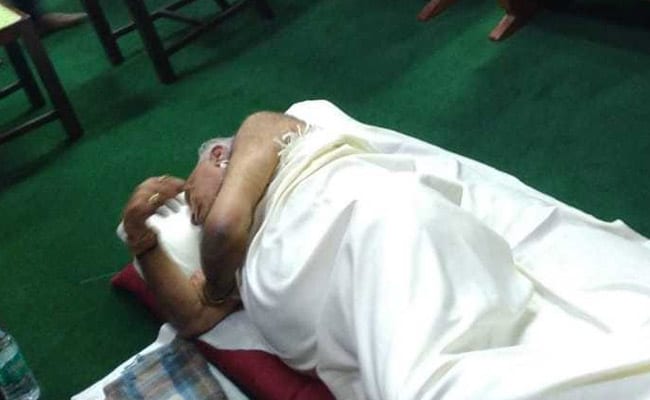 BJP chief BS Yeddyurappa sleeping on the floor of the Karnataka assembly.

"This government has lost the majority. They tried to drag on the issue and tried to provoke us but we acted with patience. We will continue to press for a trust vote on the motion. We will stage night-long dharna in the House," Mr Yeddyurappa had earlier told NDTV.

Many lawmakers slept in the Well of the House and on the passage leading to the centre.

This morning, some of the BJP legislators were seen taking a morning walk in the assembly premises.

On the BJP's complaint, Governor Vajubhai Vala yesterday wrote to Chief Minister HD Kumaraswamy and asked him to prove his majority by 1.30 pm on Friday.