If elected, Mumbai-born Dr Hiral Tipirneni would be the second Indian American woman to be elected to the House of Representatives. Pramila Jayapal, the first, was re-elected for her third consecutive term on Tuesday. 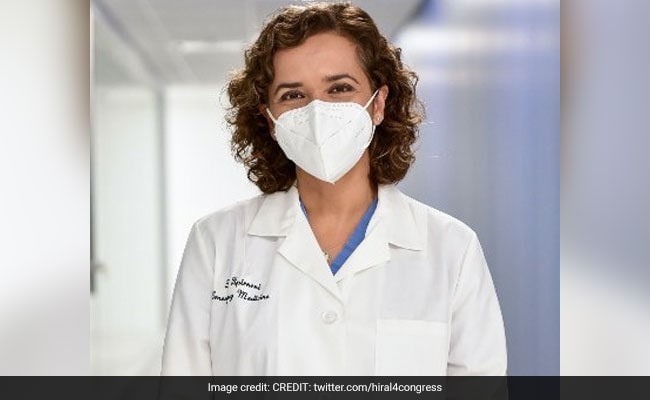 Dr Hiral Tipirneni had a lead of less than 2,000 votes against Republican incumbent David Schweikert.

Indian American emergency room physician Dr Hiral Tipirneni has maintained a narrow lead over her Republican incumbent in an Arizona Congressional race, which as of Wednesday night was too close to call.

If elected, Mumbai-born Tipirneni would be the second Indian American woman to be elected to the House of Representatives. Pramila Jayapal, the first, was re-elected for her third consecutive term on Tuesday.

Dr Tipirneni would also be the second Indian American doctor after Dr Ami Bera to be elected to the House. Dr Bera has been re-elected for the fifth consecutive term from California.

By Wednesday evening, Dr Tipirneni, 52, had a lead of less than 2,000 votes against Republican incumbent David Schweikert, who is facing an ethics investigation in the House.

If elected, the Indian American will become the second Democrat ever to represent the sixth Congressional District of Arizona.

Waiting for the results, Tipirneni told her supporters on Tuesday night that she is on the trajectory that she hopes will lead her to victory. "We are thrilled. Thank you for all of the support, but we will wait until every last ballot is counted. We want to make sure that everybody's voice is heard," she said.

There is a possibility of a recounting of votes. "Our race was too close to call last night. We knew we made it very competitive and we expected it to be tight. We need to muster every last bit of our resources to fund our emergency ballot counting effort to ensure total accuracy and full transparency," Dr Tipirneni said.

Dr Tipirneni came to America from India with her family at the age of three along with her parents. Her family struggled at first, but Dr Tipirneni's father eventually secured a job in his field of structural engineering in Ohio, where she and her brother were raised in a working-class suburb of Cleveland.

Her mother, a social worker, was the director of a downtown Cleveland senior centre and initiated its "Meals on Wheels" programme. She often accompanied her mother and it was then that she began to feel the tremendous impact small acts of service can have on another person.

Following a childhood illness, Dr Tipirneni was inspired to learn more about medicine and after graduating from public school, she eventually earned her medical degree through an accelerated, competitive programme at the Northeast Ohio Medical University.

A passionate problem-solver who thrives on working with a team, Dr Tipirneni chose to pursue emergency medicine because of the wide variety of challenges it presented and it allowed her to be the first point of contact for patients. She met her husband, Dr Kishore Tipirneni, during her first year of medical school.

After she served as the chief resident of the University of Michigan's Emergency Medicine programme, the couple looked for a place they could settle down, practise medicine and begin raising a family. They chose Phoenix.