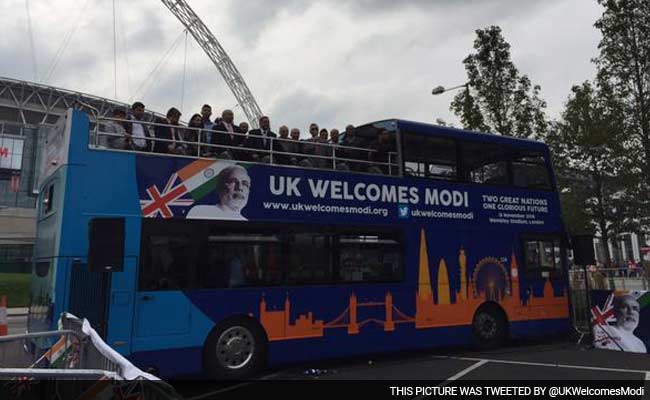 'Modi Express' bus launched in UK ahead of PM Modi's visit to the country next month.

London: Indian community groups in the UK have launched a 'Modi Express' bus for a month-long tour around iconic landmarks in London to mark Prime Minister Narendra Modi's maiden visit to the country next month.

The bus, which was launched on Sunday, made its first stop at Ealing Road, Wembley also known as 'Little India', followed by Trafalgar Square to celebrate Diwali. Mayuri Parmar of the 'UK Welcomes Modi' organizing committee said, "We have had 'Chai Pe Charcha' in India, now we will have 'Bus Pe Charcha' in the UK."

Over 400 community organisations have registered as 'welcome partners' of an Olympics style reception planned for PM Modi at Wembley Stadium on November 13.

Lord Dolar Popat, who inaugurated the bus during a traditional coconut-breaking ceremony said, "This bus launch is yet another example of the UK and India bringing people together for a positive cause."

"As we look forward to Prime Minister Modi's visit in November, I am so encouraged to see members from across our communities coming together and supporting one another. I hope many of you get the chance to support and participate in what is looking to be Modi Mania in the UK," Lord Popat said.

Britain's longest-serving Indian-origin parliamentarian Keith Vaz encouraged people to join him on the 'Modi Express' bus from Leicester saying, "even if you've left your oyster cards at home, be sure to bring your 'Modi cards' to join the 'Modi Express' wherever you are."

Muhammed Butt, leader of Brent Council, the London Borough where Wembley Stadium is situated said, "I am looking forward to welcoming Prime Minister Modi to Brent. There is huge excitement amongst all communities."

Over 60,000 people will attend the 'UK Welcomes Modi' reception and tickets are due to be distributed by Wembley Stadium in coming weeks. People from over 250 cities and towns in the UK have applied for an invitation. They have applied from as far north as Dundee and as far south as Plymouth.

A large proportion of the 1.5 million Indian diaspora will attend the event at Wembley, which will culminate in a grand fireworks display. The youngest applicant for an invitation is just two months old, while the eldest is over 100-years-old, the organisers added.
Comments
Modi Express busModi Express bus in UKPM Modi to visit UKUK Welcomes ModiLittle IndiaLord Dolar Popat