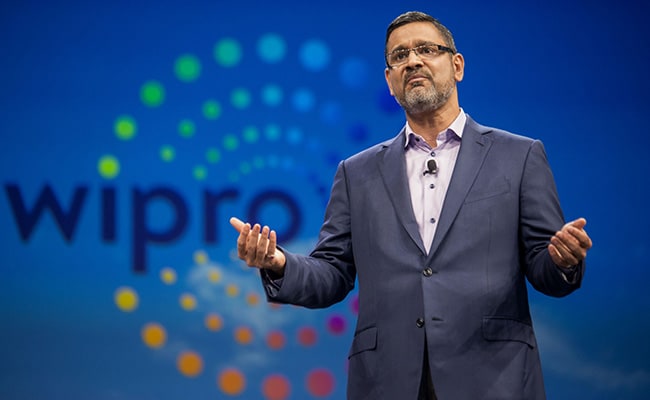 Abidali Z Neemuchwala will remain at his post until a new CEO is appointed. (Bloomberg)

Mr Neemuchwala will remain at his post until a new CEO is appointed, the company said in a statement. His departure means an even more active role -- at least temporarily -- for Rishad Premji, Wipro's hands-on, customer-facing executive chairman and son of outsourcing industry pioneer Azim Premji. It's the culmination of growing dissatisfaction with Wipro's inability to close the gap with Infosys and TCS, according to people familiar with the matter, who asked not to be named discussing a sensitive matter.

While the industry veteran presided over a 13% rise in Wipro's stock over his tenure as of Thursday's close, that lagged Infosys Ltd.'s 33% and Tata Consultancy Services Ltd.'s 78% rally over the same period.

Wipro, whose clients include Levi Strauss & Co. and Pitney Bowes, slid as much as 2.3% Friday. The company said in its statement that Mr Neemuchwala was leaving for personal reasons, while the CEO was not immediately available for comment.

Like the rest of India's IT industry, Wipro has struggled to adapt to a slowdown in growth in recent years and rising scrutiny in the US, their largest market. Clients have turned to automation and cloud services, eschewing the more labour-intensive work that India's largest IT firms specialized in. The increased cost of adapting software and hiring locally in the US -- a consequence of tightening visa restrictions -- weighed on margins.

Mr Neemuchwala joined Wipro as a chief operating officer in 2015 from TCS, the industry leader where he spent all of his previous career. He took the helm exactly four years ago to the day. The then-new CEO prioritized cross-selling services to the company's top customers while promoting the hiring of local American talent to differentiate the firm from its bigger rivals. But Infosys and TCS made significant investments in recent years on areas from artificial intelligence to the cloud, while also stepping up local operations in the US.

Wipro's larger rivals began to widen their lead, while its own numbers flagged. The company grew revenue 7.5% in its last fiscal year -- less than half the pace at TCS and Infosys. Brokerages including Morgan Stanley now question whether the company can meet sales targets unveiled in January.

It's unclear when Mr Neemuchwala will officially step down, though the company emphasized it will ensure a smooth transition. The CEO is regarded by some as laying the foundation for the long term.

"He exited non-core businesses like eco-energy, desisted from re-bidding for low-value contracts, re-looked the value proposition in existing contracts, and restructured the company in tough markets like India and the Middle East where the business is not doing well," said Sudheer Guntupalli, the Mumbai-based vice president of Motilal Oswal Financial Services Ltd. But "Wipro could have avoided a few wrong moves."