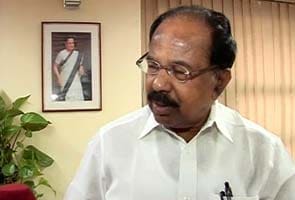 New Delhi: Strongly refuting charges of transferring an officer for being tough on Reliance Industries, Oil Minister M Veerappa Moily today said he will resign if even an iota of evidence was produced against him.

Mr Moily said Giridhar Aramane, Joint Secretary in his ministry, has not been transferred as is being alleged by CPI leader Gurudas Dasgupta.

Mr Aramane, 50, a 1988-batch IAS officer of the Andhra Pradesh cadre who was appointed Joint Secretary Exploration by Mr Moily's predecessor S Jaipal Reddy, will continue in the same capacity and only some of his responsibilities like unconventional resources and gas pricing, have been shifted to another Joint Secretary, Mr Moily said.

With government already taking a decision on how all domestically produced gas will be priced from April 2014 to 2019, only implementation part remains and not much work is left on the pricing front.

Exploration division, where RIL has faced most hurdles in getting clearances, will continue to
remain with Mr Aramane.

"I am telling you again and again, our conscience is very clear. We have not taken any decision to respond to anybody's needs. (If there is) even an iota of evidence, let them show,
I will not be there the next day in this seat," Mr Moily said.

The changes being made are part of work distribution so as to lessen burden on those over-worked, he said.

"Even after nine months (in Oil Ministry) I have not changed even a director. That (allegation of Joint Secretary being transferred) is not correct. It is redistribution of work.

Promoted
Listen to the latest songs, only on JioSaavn.com
"We are prepared to face anybody... but this kind of reckless allegation, personal allegation will not augur well for a respected member," Mr Moily said without naming Mr Dasgupta.

Mr Moily questioned how Mr Dasgupta was able to lay a hand on Cabinet notes on gas pricing even before they go to the Cabinet or his notes before they become an order.