What Is SSC Paper Leak Case? All You Need To Know

After a week-long protest by the aspirants over the alleged SSC paper leak, a CBI probe has been ordered by the government. 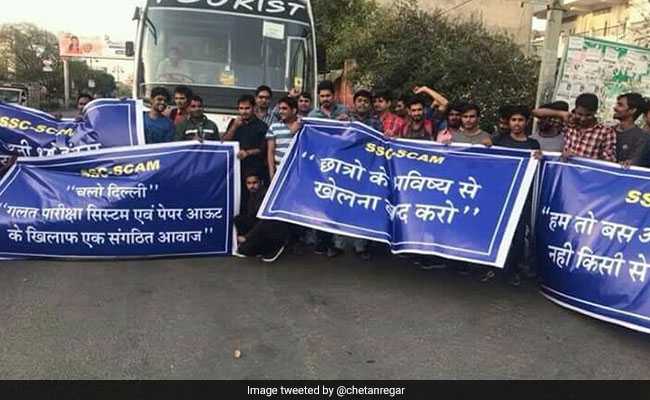 SSC Paper Leak Case: The Supreme Court will hear the plea on March 12.

Aspirants, who have been protesting since a week over the alleged SSC paper leak, got slight relief today after the government gave nod to the CBI probe. "We have accepted demands of protesting candidates and have given orders for a CBI inquiry, protests should now stop," ANI quoted Union Home Minister Rajnath Singh as saying. This year, the Staff Selection Commission's Combined Graduate Level Tier-II exams (SSC- CGL Tier-II) exams were held from February 17-22. These exams are online tests to fill subordinate posts in the government such as tax inspectors, clerical staff and accountants. The Supreme Court will hear the plea seeking a court-monitored CBI investigation in the SSC paper leak case on March 12.

A look at the SSC Paper Leak Case:

On February 21, screenshots of some objective-type questions with answers went viral after the examination, fueling speculations of malpractices. Following this, the Staff Selection Commission (SSC), in its official statement, said that the claims were "baseless." The SSC had said, "The Commission verified from its internal sources and found that the allegation in this regard was totally mischievous and baseless. It appears that this was done with malafide intention to dislodge the entire examination process."

The Commission further said that it has taken very serious view of the incident and is registering a complaint (FIR) with the Crime Branch, Delhi Police for further investigation in the matter."

Since the screenshots raised questions over the fair play in the conduction of SSC exams, thousands of candidates started protesting outside the SSC office at Lodhi Road, New Delhi on February 27 demanding a CBI inquiry into the SSC paper leak issue. Aspirants also vented out their anger on social media platforms.

Protests were also seen in Patna, Bareily and other areas:

Massive Protest by #SSC Students at Gandhi Maidan Patna!
Keep It UP!
#SSCExamScam#SSC_SCAMpic.twitter.com/C8OCude8Pb

Promoted
Listen to the latest songs, only on JioSaavn.com
Delhi Chief Minister Arvind Kejriwal tweeted, "Thousands of aspirants are demanding a CBI inquiry into the SSC exam scam. This issue is related to their future. The central government should immediately accept the aspirants' demand and order a CBI inquiry."

CPM General Secretary Sitaram Yechury said, "Is this another Vyapam being covered up by the BJP?"

Is this another Vyapam being covered up by the BJP? #SSCpic.twitter.com/UxwBZbcGTv

Congress spokesperson Randeep Singh Surjewala also extended complete support to the agitating students and said in a statement, "We demand that this scam, which is at the same scale as Vyapam, perhaps even bigger that it, should be probed by the CBI."

Congress MP Shashi Tharoor said that he spoke with the minister in the Parliament over the issue. "Spoke to (Jitendra Singh) in Parliament today. He has agreed to a CBI inquiry on all the issues raised by the students protesting the SSC-CGL Mains papers 'leak, conduct of exams'. I thank him for his willingness to listen to these legitimate demands (with) an open mind," Mr Tharoor tweeted.

The Commission had initially rejected the charges but after the protests started to spread and opposition parties lent their support, Home Minister Rajnath Singh ordered the probe. After that order came out, the crowds outside the SSC headquarters started to shrink, but several hundred protesters decided to stay put at the headquarters demanding to see the document ordering the probe.

Swaraj India's chief Yogendra Yadav tweeted that government order be made public. "Govt order needs to be made public, so that we know: What is the scope of the probe? Limited only to CGL or covers all exams and all forms of irregularities? Is the inquiry time bound? Will the SSC continue to hold exams with its dubious practices when the probe is on?," Mr Yadav tweeted.

Lok Sabha member from Bihar Pappu Yadav had also moved an adjournment motion to press for an inquiry in the Lok Sabha.