Pictures of hundreds of schoolgirls sitting on the floor and eating rice and salt have gone viral and invited all-round condemnation in West Bengal. 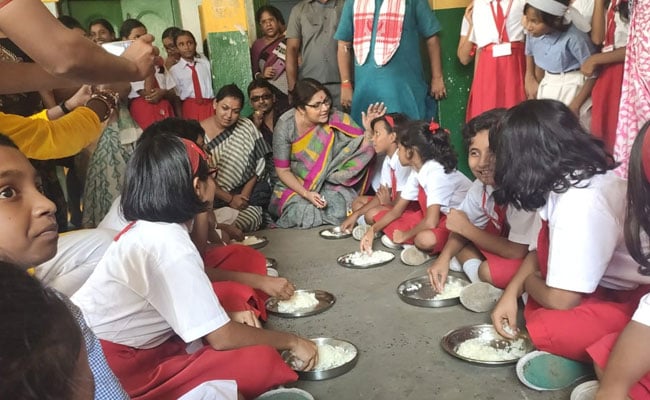 Schoolgirls in West Bengal were served salt and rice as part of the mid-day meals.

Rice and salt. That's all that was served as mid-day meal to hundreds of girls at a state run school in West Bengal on Monday.

Local BJP MP Locket Chatterjee rushed to the school and accused Mamata Banerjee's government of corruption so vociferously, the state education minister Partha Chatterjee had to respond quickly with "Corruption in mid-day meals will not be tolerated."

But pictures of hundreds of schoolgirls sitting on the floor and eating rice and salt have gone viral and invited all-round condemnation. One prominent educationist called it "daylight robbery".

"People have complained to me of corruption in the mid-day meal scheme in this school," Hooghly's BJP MP Locket Chatterjee said. She was visiting her constituency on Monday when she apparently received a call about the lunch served at the school and rushed over.

On a blackboard on the school verandah, the mid-day meal menu was written in white chalk: "Phan Bhaat aar Noon" or "starchy rice with salt".

In Bengal, the extremely poor have this for a meal, with a dash of oil and green chillies.

"Mid-day meal money is being stolen. Top Trinamool people are involved. I saw in the school account books that 5,000 eggs were bought at some time for Rs 25,000 but the girls did not get the eggs. Where did the eggs go?" Ms Chatterjee said. She also claimed some 250 bags of rice were missing.

"Mamata Banerjee is forever boasting about Kanyasree. But does Trinamool have no shame, stealing food from the plates of girl children," she added, demanding a probe.

The Trinamool link is the head of the school managing committee, Gaurikanta Mukherjee, who is also a member of the Trinamool Congress and chairman of the Chinsura Municipality.

Mr Mukherjee claimed Monday's incident was "sabotage" by some teachers at the school which has 600 students, 10 teachers and no headmistress for the last six months.

After the last headmistress left, the school managing committee set up a panel of four teachers to run the mid-day meal scheme. "A signature change was required at the bank in the mid-day meal account but the teachers refused to cooperate," Mr Mukherjee told the media.

There was money in the bank but non-cooperation by teachers led to a situation on Monday when there was no cash at the school to buy vegetables and eggs. The rice-salt meal is an exception, Mr Mukherjee claimed. The usual meal always contained protein.

In fact, according to the meal chart, soya bean curry was on the menu on Monday. But, in fact, only rice and salt was served. Some of the schoolgirls Locket Chatterjee spoke to said the rice and salt meal had been served at the school earlier too.

The state government has promised a probe into the mid-day meal embarrassment. It should also probe why the school does not have a headmistress for six months.