Mamata Banerjee's Retort On "Parivatan In Bengal" To PM Modi

Thousands of people, especially women, are likely to assemble at Darjeeling More at 1 pm to join the protest march, the Trinamool Congress said. 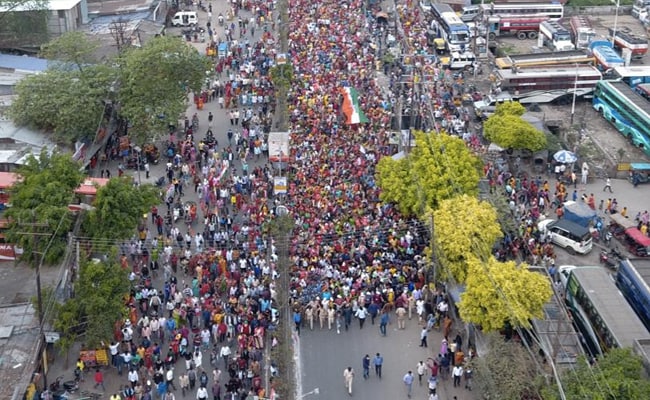 As Prime Minister Narendra Modi addressed his first Kolkata rally prior to the eight-phase West Bengal assembly polls, Chief Minister Mamata Banerjee took on his government by leading a "padayatra" or foot march in Siliguri to protest against the steep hike in fuel prices, including LPG cylinders.

Thousands of supporters, especially women, were seen holding red-coloured cardboard replicas of LPG cylinders at the ''yatra'', which was led by the TMC chief, and joined by her ministerial colleague Chandrima Bhattacharya, and party MPs Mimi Chakraborty and Nusrat Jahan.

"He says there is no poriborton in Bengal, poriborton in Delhi. Before the polls it is Ujjwala (the free LPG connection scheme for poor) and post polls that turns into ''Jumla'' (empty promise). This cannot continue any more. The poor should be given cooking gas for free," Ms Banerjee said at a rally in Siliguri.

"Narendra Modi and Amit Shah are the only syndicate in India. Covid pandemic happened, fuel prices rose but the prime minister is nowhere to be found. You get free rice but to cook it you need to spend on gas," she said.

Claiming that LPG cylinders would soon be beyond the reach of common man, the Chief Minister Banerjee had said on Saturday that massive demonstrations should be held to "make our voices heard".

The chief minister was seen carrying a cardboard replicas of LPG cylinder as she led the protest.

The "padyatra" - which began from Darjeeling More - has crosed Mahananda Bridge, which is at the heart of Siliguri.

"We need to organise massive demonstrations to make our voices heard. Many of those taking part in the rally will carry empty LPG cylinders to mark the protest," Ms Banerjee was quoted as saying by news agency PTI following her arrival in Siliguri from Kolkata on Saturday.

Last month, the West Bengal chief minister arrived at work on an electric scooter to drive home the point on spiralling fuel prices. Ms Banerjee sat pillion as Urban Development and Municipal Affairs Minister Firhad Hakim rode the battery-powered scooter foa a considerable stretch of the five-kilometre trip from Kolkata's Hazra More locality to the state secretariat in Nabanna. The entire ride was telecast through Facebook Live. Later the Chief Minister addressed the media, seated on the e-scooter or battery-operated scooter.

"Kerosene is not available. One crore people in Bengal use it. Petrol-diesel (prices are) up. Gas up...even last night. That's why I decided to take the scooter to work," she said.

"Modi is selling the country. This government is anti-people, anti-women, anti-farmer, and anti-young generation. We want this government to go," she said.

The "padayatra" by the chief minister today is seen as a counter to the Prime Minister's massive public rally at Kolkata's famed Brigade Parade Ground.

At his Kolkata rally PM Modi lashed out against Ms Banerjee and promised a "Sonar Bangla" (Golden Bengal) if the BJP is voted to power. He attacked the state government for allegedly letting down the people who had placed much expectation in it. "Bengal trusted Didi for Pariborton. She broke the trust," he said today at a massive Kolkata rally.

"I have come here to make you believe in 'Asol Poribortan', believe in Bengal's development, in change of Bengal's situation, in increasing investment and industries in Bengal, and in the reconstruction of Bengal," PM Modi said at the city's Brigade Parade Ground.

Elections to West Bengal's 294-seat Assembly are scheduled to be held in eight phases from March 27 to April 29 and the results will be declared on May 2.

After winning three seats in the 2016 Assembly election, the BJP had made deep inroads into the state by the 2019 Lok Sabha elections, winning 18 of the 42 seats and reducing Trinamool's numbers to 22. The Congress won two while the Left got none.

Remdesivir Production To Be Ramped Up, Prices To Be Cut: Minister