Watch: Man Brings SUV To Kerala Beach, Gets Stuck In Sand. Internet Says "He Deserved It"

Posted by Reddit user, KillerFernandes with the caption, "He deserved it." 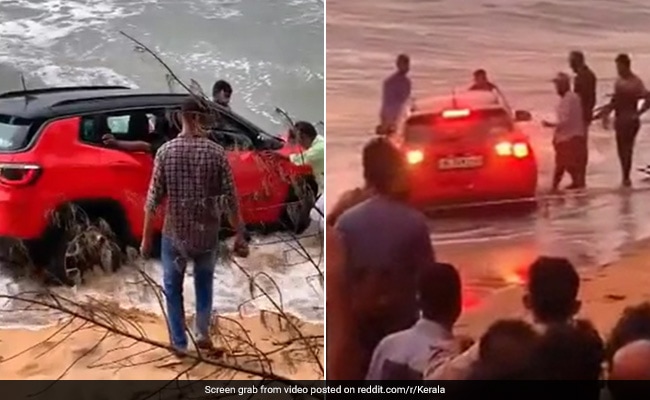 The video posted by a Reddit user has received 99,000 upvotes and 1,100 comments

There have been multiple incidents of cars getting stuck on beaches across India. A few days ago, an MG Astor got stranded in the soft beach sand around Goa's famous Morjim beach. Now in yet another irresponsible act, a youngster from Kerala got his Jeep Compass stuck on a beach. A video has surfaced on Reddit where we see a red Jeep Compass driven too close to Kerala's sea shore. A few seconds into the video, the car gets stranded and even after multiple efforts, the driver is unable to take out the vehicle in reverse.

Posted by Reddit user, KillerFernandes with the caption, “This guy deserves it,” the video further shows people trying to help the driver and later fighting with him. The SUV tyres got deeper into the loose sand, the more he accelerated. The incident attracted onlookers, and after a while, a crane was called to take the Jeep out of the seashore.

Check out the video here;

The video does not show if the car got out of the seashore or not. So far, the video has received 99,000 upvotes and 1,100 comments. Internet was not happy with this bizarre and irresponsible act of the man. A user wrote, “People should have pushed the car further into the ocean instead of pulling it out.” Another comment read, “Show off paid off.” “Bruh did they try pulling a car using rope by a JCB?” the third commented.

It is still not clear how many people were inside the car but none were injured in the incident.

Jeep compass gets stuck on a beachKeralaViral video