Viral Video: In UP, A BJP MLA, A Slap, And Then A Clarification

"The fact-of-the-matter is that incident has just been twisted by the opposition for political mileage," BJP's Pankaj Gupta told reporters. 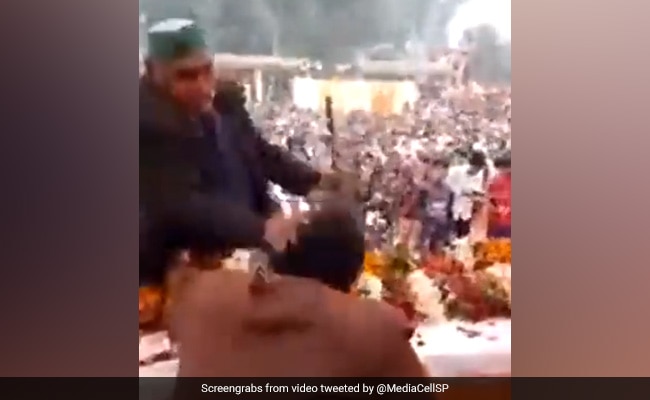 A viral video from Uttar Pradesh has given fresh fodder to the opposition ahead of the state elections to attack the Yogi Adityanath government. As the video was being widely shared, a prompt reaction came from the BJP MLA Pankaj Gupta who was seen in the clip, purportedly being slapped by a farmer. "It was just a pat on the cheek," he told reporters.

The 21-second clip ,reportedly shot three days ago shows the BJP MLA from Unnao on the stage at an event to unveil a statue . An old man then comes close to him and then is seen giving him, what seems to be, a slap on the face. A couple of men then quickly surround this old man - apparently questioning him for his action - and escort him as they all descend the stage. It is not clear what provoked the man, who is a farmer in the area.

The party tweeted the video with a dig in Hindi- "At a public meeting organised by BJP MLA Pankaj Gupta, a farmer leader slapped the MLA. This slap was not for the MLA but for the BJP-led Yogi Adityanath government's poor policies, poor governance and autocracy."

..... farmer now claims he was lovingly waving his hand over the MLA and inadvertently hit him ???? pic.twitter.com/4oFpUmciaF

But the MLA tried to clear the air about the clip from Wednesday's event at a press meet with the old man.

In another video of the presser, a reporter asked the old man - "You're saying that it was just a gesture out of fondness but isn't it sending a wrong message."

"I did not hit him. I just came close to him and asked him something, addressing him as "Beta (son)".

Then the MLA intervenes, "The fact-of-the-matter is that incident has just been twisted by the opposition for political mileage. They don't have any issues. They want to show that farmers are against Prime Minister Narendra Modi. He (the old man) is like my father. He used to do this earlier too."