Anupriya Patel, and her mother Krishna Patel and sister Pallavi Patel had sparred in the past too over Sonelal Patel's legacy. 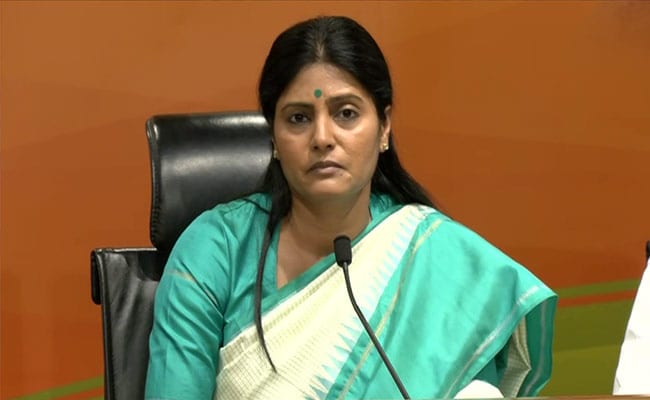 Union minister Anupriya Patel's mother and sister on Saturday slammed her for getting "cancelled" the permission they had sought to celebrate the birth anniversary of influential OBC leader Sonelal Patel, bringing to the fore the feud in the family.

The Union minister, who heads the Apna Dal (Sonelal), and her mother Krishna Patel and sister Pallavi Patel had sparred in the past too over the Kurmi leader's legacy.

Police had a tough time controlling the situation. They took the Union minister's mother and sister, and opposition alliance leader Om Prakash Rajbhar in their custody.

Pallavi Patel, who had defeated Uttar Pradesh Deputy Chief Minister Keshav Prasad Maurya from the Sirathu Assembly seat, and her mother accused Anupriya Patel of depriving them of the legacy of the late leader.

Sonelal Patel, who was a close companion of BSP founder Kanshi Ram, had died in a road accident in 2009.

Krishna Patel said the "mistakes committed by Anupriya cannot be forgiven". Pallavi Patel claimed that permission for three venues of the programme was cancelled following "orders from top".

Krishna Patel said, "The developments which took place today are extremely saddening and disgusting. Dr Sonelal Patel was not a person belonging to a particular individual. He was a messiah for the entire state, and if any person tries to stop this movement (of Sonelal Patel), it cannot be stopped."

"Today's gandgi' (dirt) of Anupriya cannot be forgiven," she said seething with anger. The mother even used the word "badtameez" (ill-mannered) for Anupriya Patel and said she would slap her if she comes before her.

"Before being a father, Sonelal was a husband. I have the first right over him. Who is she to snatch my rights," the mother asked.

She added, "The day I contested the elections, police were deployed outside my house. These people have crossed all limits." She said it was she who made Anupriya Patel contest the 2012 UP Assembly and 2014 Lok Sabha elections.

"The dispute is that of supremacy. She is gripped with the feeling that barring her no one should be there," she said attacking Anupriya Patel.

She also alleged that the Union minister fielded her candidate against her in Pratapgarh Assembly constituency in the recent UP polls and her husband Ashish Patel camped there for 15 days.

"Why was he camping there, if they had not put up a candidate? They distributed pamphlets stating that Krishna Patel should not win the elections. At that time it was not mother but Krishna Patel. They have forgotten (how to give) respect. I had never expected this from my children," she said.

Pallavi Patel told reporters, "Supporters and followers of Sonelal Patel every year observe his birth and death anniversaries. This year, it was planned in Lucknow."

She said they had sought permission for Ravindralaya, then for Vishveshwarya auditorium and then for Mercury auditorium of Indira Gandhi Pratisthan. But the permission was cancelled, she said.

"We have not received any written information in this regard. When I tried to speak from a sub-inspector to the Police Commissioner as to why permission was not granted for three venues, I was told that there is pressure from the top," she said.

The Apna Dal was founded in 1995 by Sonelal Patel.

In October 2014, fissures within the party became public for the first time as its then national general secretary Anupriya Patel was removed from her post.

The two factions of the party have also aligned with the rival groupings.

While the Apna Dal (Sonewal) with 12 MLAs and two MPs, including Anupriya Patel, is an ally of the BJP, the rival faction led by her mother and elder sister are part of the Samajwadi Party-led opposition coalition.

Though nobody from the SP was present at the protests staged by Krishna Patel and Pallavi Patel, Suheldev Bharatiya Samaj Party (SBSP) president and MLA Om Prakash Rajbhar and Mahan Dal head Keshav Dev Maurya joined the mother-sister in the stir.

Lucknow Commissioner of Police DK Thakur said Anupriya Patel had sought permission for Indira Gandhi Pratisthan, which was given. Pallavi Patel was not given the nod as two parties cannot be given permission for a programme at the same venue, he said.

In a statement, the Apna Dal (Sonelal) said, "The permission for Indira Gandhi Pratisthan was given by the administration on June 24. As a result of which, the allotment of Ravindralaya auditorium has been cancelled, which may be re-allocated to Krishna Patelji."

Apna Dal (S) working national president Ashish Patel claimed in a statement issued on Saturday night that the party had applied for booking at Indira Gandhi Pratishthan on June 18, and got approval on June 24.

"While our programme was already fixed at the Indira Gandhi Pratishthan, Pallavi Patel wanted to start a fight between the workers of both the parties by booking the same hall. Why didn't she (Pallavi) choose any other hall in the city when Gandhi Bhavan, Sahakari Bhavan were all empty," read the statement.

The working president said that Pallavi Patel was insisting on holding the programme at the Indira Gandhi Pratishthan "just to gain cheap publicity".

Addressing the birth anniversary function, Anupriya Patel hailed her father Sonelal Patel and said though he was physically not present with them, his thoughts continue to inspire people.

She also said her father's dream will be fulfilled only when the party's strength increases in the Uttar Pradesh Assembly and the Lok Sabha.