Several Congress leaders feel the party should announce a Chief Ministerial candidate to ensure its campaign is not derailed by "confusion". 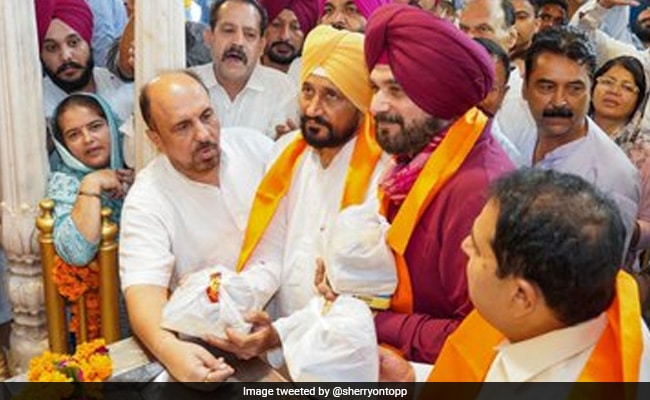 Days after Aam Aadmi Party (AAP)'s tele-vote, a Twitter poll on who should be the Congress's Chief Ministerial candidate in Punjab has started a buzz.
The poll was started by Rahul Gandhi's close aide Nikhil Alva. It asks who should be Chief Minister face of the Congress in Punjab and gives four options - incumbent Charanjit Singh Channi, state party chief Navjot Singh Sidhu, senior leader Sunil Singh Jakhar and the fourth option is that no choice should be announced.

The poll comes against the backdrop of main challenger Aam Aadmi Party (AAP) declaring Bhagwant Mann as its choice for the top post.

Several Congress leaders have already said the party should announce a name to ensure that its campaign is not derailed by "confusion".

Who should be the CM face of the Congress in Punjab?

With main challenger Aam Aadmi Party (AAP) declaring Bhagwant Mann as its choice for the top post, several Congress leaders feel that the party should announce a name to ensure that its campaign is not derailed by "confusion".

Backing Chief Minister Charanjit Singh Channi, state minister Brahm Mohindra yesterday said there should be no "confusion" when there is already one who "proved himself beyond everybody's expectations". With AAP and Akali Dal declaring their candidates, the Congress "cannot afford to leave any vacuum", he said.

Another minister Rana Gurjeet said the suspense over Mr Channi's position after the polls will "not only be politically unwise but suicidal".

The remarks come against the backdrop of state Congress chief Navjot Singh Sidhu's recent statement that the people of Punjab, and not the party leadership, will decide who will be the Chief Minister.

Chief Minister Charanjit Singh Channi, who was put on the top post four months after a rebellion led by Mr Sidhu led to the removal of Captain Amarinder Singh, has in a short time created a distinct brand for himself. With his image of an accessible Chief Minister and more recently, his handling of the row over the security lapse of Prime Minister Narendra Modi, Mr Channi has positioned himself as a strong contender to the top post.

Despite the party's shows of unity in the past, Mr Sidhu has been targeting the state government over a host of issues. Most recently, when Mr Channi's nephew was raided by the Enforcement Directorate in a sand mining case, the outspoken Mr Sidhu did not condemn the central agency move like other party leaders. Instead, he shared news reports and comments on how illegal sand mining can be addressed.

The party leadership, however, is treading with caution that borders on indecision. The Congress campaign committee chairman Sunil Jakhar has said that the party will go into the polls under a joint leadership.

On social media, however, a different story seems to be unfolding.

Shortly before the Nikhil Alva poll, the party's official handle shared a video clip from an interview of actor Sonu Sood in which he says the "real CM" should be one who is forced to sit in the chair and does not have to advertise his capability. Right after the actor's remarks, dramatic visuals of Mr Channi followed. Interestingly, the video came a week after Mr Sood's sister Malvika joined the Congress and Mr Sidhu put up photos with them.

The Opposition, meanwhile, is leaving no opportunity to target Congress over its silence over the chief ministerial choice. Akali Dal leader Sukhbir Singh Badal has dared the ruling party to name its candidate for the post. With the AAP now backing Bhagwant Mann, all eyes are now on the Congress leadership.