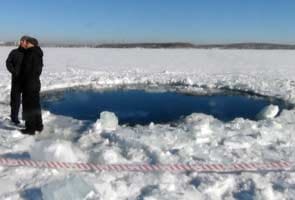 People standing near a six-metre hole in the ice of a frozen lake, reportedly the site of a meteor fall in February, outside Chebakul town in Russia (AFP photo)

Vienna: Saving humanity from a mega-asteroid strike could be the next big effort in co-operation between USA and India.

The American space agency, the National Aeronautics and Space Administration (NASA), is looking to actively co-operate with India on how best to avert the possibility of humans getting wiped out if a large asteroid were to strike the Earth.

Memories of a big meteorite striking Russia in spectacular fashion on February 15, which injured 1,500 people, are still very fresh.

Speaking exclusively to NDTV's Science Editor Pallava Bagla in Vienna, NASA chief and former astronaut Charles Bolden said the asteroid issue will be high on his agenda when he visits India next week as part of the large delegation being led by Secretary of State John Kerry for the Indo-US strategic dialogue to be held in New Delhi.

Mr Bolden will consult in detail with K Radhakrishnan, the chairman of Indian Space Research Organisation (ISRO), about how to develop technology "to move a civilisation-killer out of a collision course" with Earth.

Mr Bolden said "humanity should not go down the route of dinosaurs", which are known to have been wiped out when a giant asteroid struck the Earth. This generated a huge dust column, which blocked out sunshine for a long period, making dinosaurs extinct.

NASA has been mandated by US President Barrack Obama to examine the possibility of landing humans on an asteroid in the next decade and humans on Mars in the next 25 years.

But before undertaking the next human space flight, NASA hopes to polish its skills with full international collaboration on how to nudge a small asteroid that could be on collision course with the Earth.

Mr Bolden says by 2018, it will launch a $2 billion mission to gently nudge a small 500 metric tonne asteroid by "capturing it and redirecting it away from Earth towards the moon."
ISRO has already announced that it wants to launch an unmanned mission to closely study an asteroid soon.

Promoted
Listen to the latest songs, only on JioSaavn.com
NASA and ISRO co-operated successfully for India's maiden mission to the moon, Chandrayaan-1. In 2008, their collaborative efforts led to the first clinching evidence of the presence of water on the moon.