"The Countdown" With Prannoy Roy: Swing Factor In UP Battle-Highlights

Lok Sabha elections 2019: See how swing in votes will impact election results in UP, in this episode of "The Countdown".

Follow NDTV's analysis of the impact of swing votes in UP.

While there has been a focus on a divided opposition and whether the parties should form an alliance with the Congress, what about change in popularity? What if the BJP's popularity has actually gone up? How sensitive is the upcoming national election to the swings in popularity? Prannoy Roy, Shekhar Gupta, Dorab Sopariwala, Kamal Khan and Alok Pandey analyse how swing in votes will impact election results in UP, in this episode of "The Countdown".

Here are the highlights of the fourth episode of  'The Countdown'

Mar 21, 2019 22:25 (IST)
UP Deputy Chief Minister Dinesh Sharma on Prannoy Roy's question on hate speech, violence
It used to happen earlier that an intolerant section would spring up before the elections. Since PM Modi came to power, has there been one instance of communal violence? When it has happened, it has been dealt with without any bias. It is  for the first time that the government adopted "Sabka Saath...." Slogan.
Mar 21, 2019 22:22 (IST)
NDTV's Kamal Khan on PM Modi's cult status
Aggression has risen. PM Modi has added a new dimension to Indian politics-the bhakt cult. It does not matter who  the BJP candidate is, people will say PM Modi is winning. The BJP candidate is only helping PM Modi win the election.
Mar 21, 2019 22:19 (IST)
Dorab Sopariwala: Certain people like to vote for a winner. If they see someone could win , they go for that candidate
Mar 21, 2019 22:18 (IST)
Prannoy Roy on BJP management and organistion
Everywhere we went in UP, there is a booth "prabhari".  They are looking at up to 10 polling stations. The word that comes from, the top goes to all of the workers. They are unmatched in organizational capability.
Mar 21, 2019 22:17 (IST)
NDTV's Alok Pandey adds
Praveen Nishad had given me the same arithmetic. It was surprising that he thought he could win from Yogi Adityanath's Gorakhpur
Mar 21, 2019 22:16 (IST)
NDTV's Kamal Khan on perceptions, fringe voters
Many fringe voters will gravitate towards the ruling party, after seeing that the entire opposition has united against them. The Muslim vote division (those who want to vote against the BJP) is also halted . Fringe voters, who are not much in BJP's favour think the opposition is very united. The "mahaul" (environment) is a big deal.
Mar 21, 2019 22:15 (IST)
Dimple Yadav on women voters and election issues
Yes we will focus on women. Our party has worked for women's safety. We will highlight the same issue and talk to our voters. We will give them pensions, education and security.
Mar 21, 2019 22:12 (IST)
Akhilesh Yadav on votes, by-election
In a democracy, only votes will make you win. If you look at Gorakhpur, our vote percentage went up there. In Allahabad's Phulpur also, the votes went up. We were successful in our attempt. In Kairana, even though BJP vote percentage rose by about 3%, they still lost the seat. We could beat them because we could mobilise our votes.
The SP is also an old party. We have workers in every village. The BSP is also an established party. We have done all preparations. Once we get down to the field, it is important to boost the morale of workers.
Mar 21, 2019 22:11 (IST)
Are votes additive when parties form an alliance? 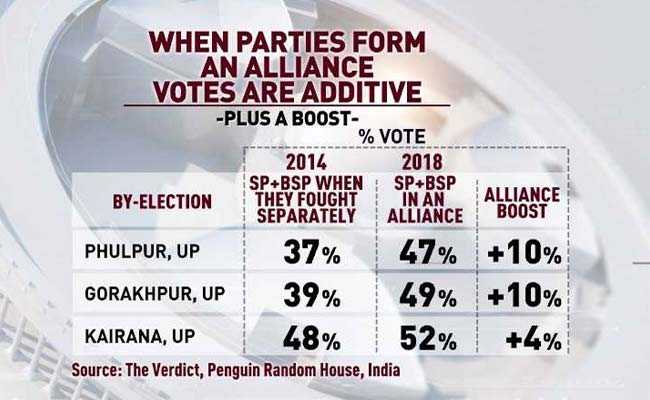 Mar 21, 2019 22:10 (IST)
Shekhar Gupta on united opposition and swing
When you come together and have an agenda, it looks like you have the possibility of winning. Then, the prospects of engineering a swing also become stronger because people need an impulse for a swing.
Mar 21, 2019 22:09 (IST)
Dorab R Sopariwala to Pramod Tiwari
The government will not change after by-election, so people vote for who they want. Will people go back to PM Modi in the general elections? PM Modi will be all over the media. How will you be able to put out your message?
Pramod Tiwari: People voted against them when they knew the government would not change. Now the government will change. People who sit in their homes thinking that there is going to be no change let's just caste our votes-will go and vote in even larger numbers. The percentage of people who don't support PM Modi is much more. People don't trust PM Modi after promises of jobs and Rs 15 lakh. No one can say that Rahul Gandhi is a liar.
Mar 21, 2019 22:08 (IST)
Congress leader Pramod Tiwari in response to NDTV's Kamal Khan
We have seen it in by-elections in India. Oppposition has lost only two elections. Where were PM Modi's "bhakts" at that time? Why didn't they make him win then? It was not that the government would have changed, still people did not vote for them"
Mar 21, 2019 22:07 (IST)
NDTV's Kamal Khan: There is a devotion that people have towards Prime Minister Narendra Modi. They know that unemployment hasn't been reduced, black money has not been brought back, still people are his fans.
Mar 21, 2019 22:04 (IST)
What happen if Congress becomes a part of the alliance? 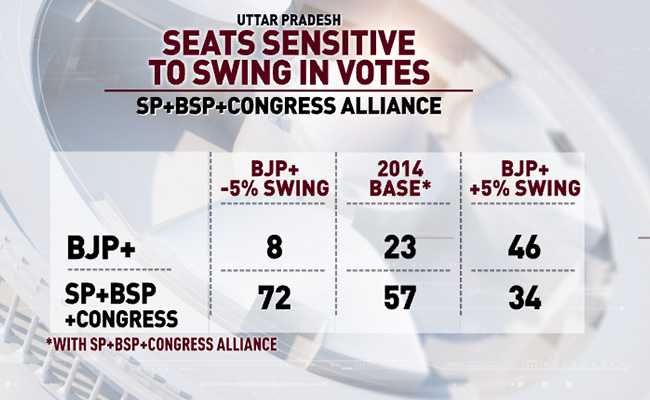 Mar 21, 2019 22:03 (IST)
Prannoy Roy analyses how swing in votes in UP will affect election results. The graphic below elucidates how a 5% swing over and away from the base year 2014 will affect results for BJP, SP and BSP 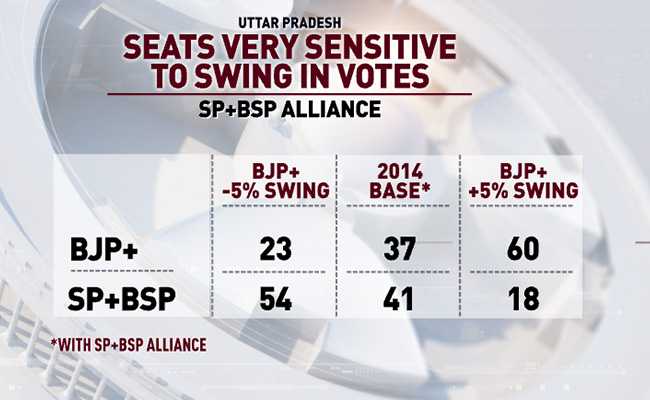