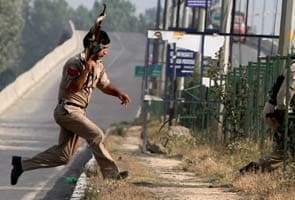 Srinagar: Eight soldiers were killed and 13 were injured, seven of them seriously, when two militants opened fire on an Army convoy on the outskirts of Srinagar, just a day before a visit by Prime Minister Manmohan Singh and Congress president Sonia Gandhi.

The Hizbul Mujahideen has claimed responsibility for the terror attack but central intelligence agencies believe that the terror group acted on behalf of the Pakistan-based Lashkar-e-Taiba.

The militants opened fire on the second of three Army vehicles before racing away on a motorcycle. They, however, ran into a police check-post about five kms away. They then lobbed a grenade and opened firing, which resulted in injuries to a CRPF officer and a Jammu and Kashmir Police officer. Abandoning the motorcycle, the men fled in a car with tinted windows.

The Jammu and Kashmir police allege that the soldiers who were attacked were unarmed because they were returning from vacation. The Army denies this but has not offered an explanation for why the soldiers didn't return fire.

Sources also say that the armed escort for the soldiers was traveling at a distance, which made the attack easier.

Promoted
Listen to the latest songs, only on JioSaavn.com
Sources involved with the investigation tell NDTV that one of the two militants seems to be from Pakistan. The other was allegedly dressed in khaki trousers and a black jacket, most likely to suggest that he was a police officer.

Today, the PM and Mrs Gandhi will address a public rally in Kishtwar.  During his two-day trip, the PM will also inaugurate a train service between Qazigund and Banihal.