After the hearing, a five-judge constitution bench led by Chief Justice Ranjan Gogoi reserved the verdict in 65 petitions including 56 review petitions and 4 fresh writ petitions in the Sabarimala temple case. 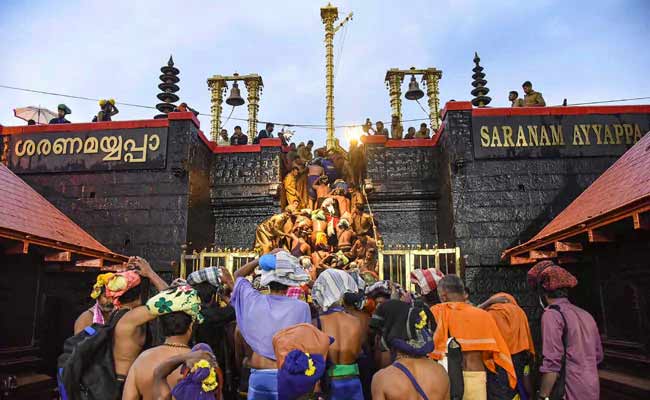 In a U-turn, the board controlling the Sabarimala temple told the Supreme Court today that it supports the entry of women of all ages at Kerala's famous hill shrine. The board is controlled by the Kerala government, which has opposed any review of the top court's September order that opened the temple doors to women between the ages of 10 and 50 and set off a huge backlash.

The annual pilgrimage season saw violent protests recently as devotees of Lord Ayyappa, the celibate god, tried to stop women and girls between the ages of 10 and 50 years from entering the shrine.

One of the two women who eventually managed to enter the temple in January was even attacked allegedly by her mother-in-law.

The issue has also triggered a political slugfest between Kerala's CPM and the opposition parties, including the BJP and the Congress.

Here are the Highlights on the Sabarimala temple verdict in the Supreme Court:

Feb 06, 2019 17:23 (IST)
Review petitioner Rahul Easwar, president of the Ayyappa Dharma Sena, says: "It's unfortunate that the Devaswom board is cheating Sabarimala devotees by using Sabarimala money. If this doesn't work out, we will work towards an Ordinance. From PM Modi and Shashi Tharoor, everyone supports us."
Feb 06, 2019 16:37 (IST)
Devaswom Board president A Padmakumar says: "Our stand is in accordance to the Supreme Court order. We had clearly stated that whatever the court's decision, will be accepted by us."
"We are clear that no review petition is required. We just wanted more time to implement the verdict. We are of the opinion that there should not be any discrimination," A Padmakumar adds.
Feb 06, 2019 14:55 (IST)
Supreme Court reserves judgment in 65 petitions including 56 review petitions and 4 fresh writ petitions in the Sabarimala temple case.
Feb 06, 2019 14:54 (IST)
Lawyer of a devotee supporting the Supreme Court verdict on Sabarimala temple says: "How can a 10-year-old affect the celibacy of God."
Feb 06, 2019 14:48 (IST)
"The next date of Sabarimala Temple opening is February 12. We should be allowed to enter the temple," advocate Indira Jaising tells Supreme Court.
Feb 06, 2019 14:36 (IST)
Purification ceremony being held affirms that menstruating women are considered polluted: Advocate Indira Jaising.
"Social boycott going on against the women who entered the temple," she adds.
Feb 06, 2019 14:31 (IST)
We have to move and transform the society to include women in all walks of life, says Travancore Devaswom Board.
The board is controlled by the Kerala government, which has opposed any review of the top court's September order that ended the temple's traditional ban on women.
Feb 06, 2019 14:24 (IST)
There is complete change of stand by the Travancore Dewasom Board, says Justice Indu Malhotra.
Feb 06, 2019 14:20 (IST)
Hearing in Sabrimala temple case resumes:
Travancore Dewasom Board opposes review, wants the verdict allowing women of all ages to stay. It says: "Everyone is entitled to enter the temple. Any practice has to be dominant with the view of equality."
"We have taken a decision to respect the judgement," the Board adds.
"It is essential part of Hindu religion to allow women to enter the temple."
Feb 06, 2019 14:02 (IST)
What has happened so far
Feb 06, 2019 13:11 (IST) 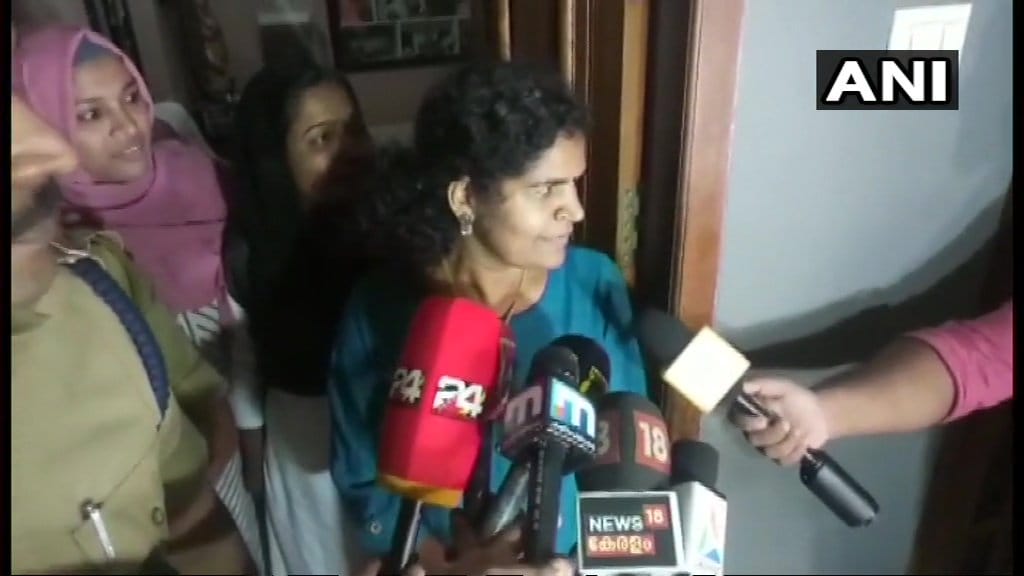 Meanwhile, Kanaka Durga, one of the two women who entered Sabarimala on January 2, entered her in-law's house yesterday in Malappuram district after court allowed her to stay at her in-law's house. She was earlier allegedly assaulted by her mother-in-law for entering the temple.
Feb 06, 2019 12:56 (IST)
The Bench rises for lunch. Hearing to continue at 2 pm.
Feb 06, 2019 12:55 (IST)
Jaideep Gupta concludes for State of Kerala.
Feb 06, 2019 12:38 (IST)
Chief Justice allots 90 minutes to those supporting the Supreme Court verdict. The Kerala state, while arguing in court, said there is no need to review the verdict.
Feb 06, 2019 11:58 (IST)
Only community can decide the custom, not court: Supreme Court told
Feb 06, 2019 11:56 (IST)
Senior Advocate Nafade now begins arguments for one of the petitioners
Feb 06, 2019 11:54 (IST)
The Supreme Court, in its September judgement, had said the practice is akin to untouchability.
Feb 06, 2019 11:53 (IST)
Untouchability will not be applicable here because it is not a caste or religion based exclusion. There is no exclusion of men and women, only exclusion for a class of women," Mr Singhvi argued.
Feb 06, 2019 11:52 (IST)
Now, Abishek Manu Singhvi argues for EX Chairman Of the Devaswom Board
Feb 06, 2019 11:37 (IST)
Senior Advocate V Giri now commences his arguments
Feb 06, 2019 10:57 (IST)
"Sabrimala custom cannot be equated to untouchability   It is only a religious custom," K. Parasaran argues.
Feb 06, 2019 10:49 (IST)
The five-judge constitution bench led by Chief Justice Ranjan Gogoi. Justices Rohinton Nariman, AM Khanwilkar, DY Chandrachud and Indu Malhotra are part of the bench.
Feb 06, 2019 10:48 (IST)
The Supreme Court is hearing 65 petitions including 56 review petitions and 4 fresh writ petitions.
Feb 06, 2019 10:37 (IST)
Senior Advocate K. Parasaran appearing for the Nair Service society begins arguments for reviewing the verdict.
Feb 06, 2019 10:36 (IST)
Supreme Court has begun hearing the case.
Chief Justice Ranjan Gogoi: We have 54 review petitions. Few PILs and some appeals. Who would like to argue first?
Feb 06, 2019 10:12 (IST)
The annual pilgrimage season, which recently got over, was riddled with protests from Lord Ayyappa devotees.
Feb 06, 2019 10:09 (IST)
All About Justice Indu Malhotra, Who Dissented In Sabarimala Verdict
Justice Indu Malhotra is one of the three women judges in the Supreme Court - a first since Independence. In April, she became the first senior woman advocate to be directly appointed as a judge to the Supreme Court.
A decade earlier, Ms Malhotra was the second woman lawyer to be appointed as senior advocate by the Supreme Court, three decades after the first, Justice Leila Seth, was designated.
Before her appointment as Supreme Court Justice, Indu Malhotra had practiced law for three decades - she specialises in arbitration, and has appeared in various domestic and international commercial arbitrations.
A second generation lawyer, Justice Indu Malhotra was born in 1956 in Bengaluru. She went to school in Delhi; obtained her Bachelor's Degree in Political Science from the renowned Lady Shri Ram College in Political Science, and later did her Masters in Political Science from Delhi University, according to the Supreme Court website.
She started her career as an Advocate in 1983 when she enrolled with the Bar Council of Delhi.
Feb 06, 2019 09:26 (IST)
The verdict had set off massive street protests in Kerala. The annual pilgrimage season saw violent protests as devotees of Lord Ayyappa, the celibate god, tried to stop women and girls between the ages of 10 and 50 years from entering the shrine.
Feb 06, 2019 09:25 (IST) 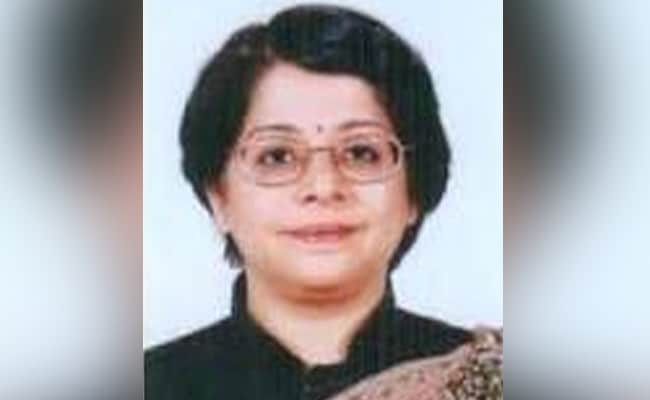 The Sabarimala case was earlier scheduled for January 22, but had to be postponed as Justice Indu Malhotra, one of the judges on the panel, was on medical leave. Justice Malhotra, the only woman judge on the bench, had dissented with the verdict in September, saying courts must not interfere with issues concerning "deep religious sentiments".
Feb 06, 2019 09:25 (IST)
A batch of over 60 petitions will be heard by a five-judge constitution bench led by Chief Justice Ranjan Gogoi.

In Early Trends, Naveen Patnaik's Party BJD Ahead of BJP In Odisha Election