Lok Sabha Polls: Sheila Dikshit, who heads the Congress' Delhi unit, is likely to contest from East Delhi, sources said, since her son Sandeep Dikshit has decided not to contest. 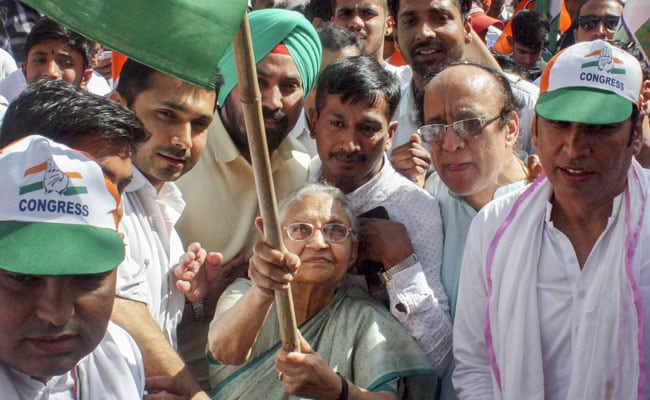 The Congress has decided to focus on deciding its line-up for the seven Lok Sabha seats in Delhi after party chief Rahul Gandhi's twitter outreach to Aam Aadmi Party yesterday received an acrimonious response from Arvind Kejriwal.

Party sources, however, indicted that there is room for change if AAP happens to fall in line.

Sources said so far, the Congress has zeroed in on seven names for all constituencies. Sheila Dikshit, who heads the party's Delhi unit, is likely to contest from East Delhi, sources said, since her son Sandeep Dikshit has decided not to contest.

Ms Dikshit's predecessor in the state unit, Ajay Maken, is likely to contest from New Delhi. Kapil Sibal, a sitting member of Rajya Sabha, is likely to be fielded from Chandi Chowk, which he represented twice earlier. The other former parliamentarians expected to contest are Mahabal Mishra, JP Agrawal, Ramesh Sharma and Rajkumar Chauhan.

This morning, Arvind Kejriwal's deputy Manish Sisodia had indicated that AAP is still open to negotiations, tweeting that the party was nominating senior leader Sanjay Singh for talks with the Congress. He had advised Rahul Gandhi to do the same, but tucked in a message that all 18 seats across Delhi, Punjab and Haryana would be up for negotiation.

The Congress' response was to start drawing up candidates' lists.

Negotiations with AAP have dragged on for a month, prodded by key opposition leaders including Sharad Pawar, Chandrababu Naidu, MK Stalin, Sitaram Yechury and Mamata Banerjee.

The Delhi Congress leaders, initially resistant to the idea, had finally left the decision to Rahul Gandhi.

After days of needling by Arvind Kejriwal, with allegations that the Congress was in league with the BJP, Mr Gandhi yesterday tweeted, "An alliance between the Congress and AAP in Delhi would mean the rout of the BJP. The Congress is willing to give up four Delhi seats to the AAP to ensure this. But, Mr Kejriwal has done yet another U-turn! Our doors are still open, but the clock is running out".

Mr Kejriwal retorted, "What U-turn? Your tweet shows your interest in alliance is just pretence," and repeated his accusation that the Congress was helping Prime Minister Narendra Modi.