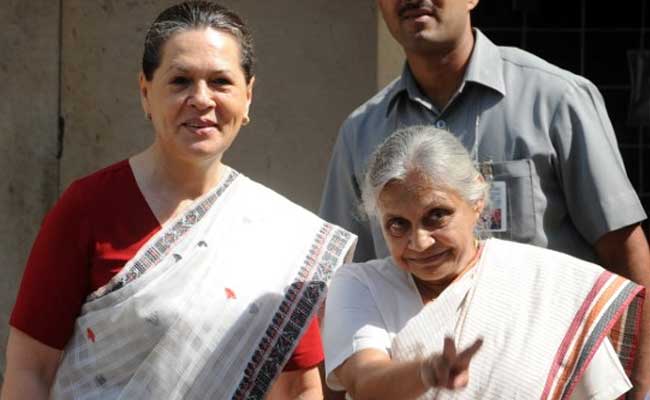 Sonia Gandhi said no one understood the real importance of responsibility better than Sheila Dikshit.

UPA Chairperson Sonia Gandhi said on Saturday that former Delhi Chief Minister Sheila Dikshit guided her "more like an older sister than party colleague" when she became party chief in 1998 and described her as "the best and most effective chief minister we have had".

Delivering the Sheila Dikshit Memorial speech in Delhi, Sonia Gandhi recalled her association with the late leader who passed away on July 20 and said her life "teaches us that that there is nothing more worthy for a public person than genuine service of the people".

"Rarely does history bring together compassion, statesmanship, efficiency and stamina in one person. Sheilaji was one such example in recent times," she said.

Mrs Gandhi said no one understood the real importance - or weight -- of responsibility better than Ms Dikshit.

"She was not one to shy away from shouldering hers, no matter what challenges she confronted. A student of history, she was aware that success does not come without struggle. And this perhaps explains why even in her struggles she was able to maintain her grit and composure," Mrs Gandhi said.

"In her long years in public service, she experienced life's ups and downs, victories and defeats. But she took it all in her stride, and responded to the call whenever it came, always keeping her sights firmly on the larger goal of making a difference," Mrs Gandhi said.

The Congress leader said such was her humility that she never became a prisoner of her many electoral successes and such was her dedication that she did not allow herself to despair in the face of criticism. "Such qualities distinguished her, as did her commitment to the party, and its principles and values," she said.

Mrs Gandhi said her association with Ms Dikshit was longer than her political career and started from the days when former prime minister Indira Gandhi recognised her many talents.

She recalled her working as a minister in the Rajiv Gandhi government after being elected an MP from Kannauj.

"As for myself, she stood by my side in my darkest years, later urging me, again and again, to take on the presidentship of the Congress Party. When I did, she was there guiding me more like an older sister than party colleague," she said.

Mrs Gandhi said they worked closely when she became chief of Delhi Congress e and then served for an unprecedented 15 years as the chief minister of Delhi.

"It was a role she fulfilled like no one before or since. Her years at the helm became her crowning achievement. She was not only the best and most effective chief minister we have had, but she was also able to reach out to and be respected by people across the political spectrum," Sonia Gandhi said.

She said Ms Dikshit's vision and hard work transformed the Indian capital into a thriving and efficient metropolis, making it a better place for all its inhabitants.

She said the residents of the city remain grateful and proud of her accomplishments.

Sonia Gandhi said Ms Dikshit stepped forward like a loyal soldier of the party and contested the Lok Sabha elections even though she had not been too well.

"Delhi and the Congress party won''t be the same without Sheilaji. The city has lost its most able administrator and the party has lost one of its most committed workers. But we can attempt to fill this void by upholding those very principles and ideals she stood for and dedicated her life to," she said.

"We will miss her, but we are grateful that she was among us and that her memory will continue to inspire us," Mrs Gandhi added.