Shatrughan Sinha said that Tejashwi Yadav has "the capability, power and devotion to lead Bihar". 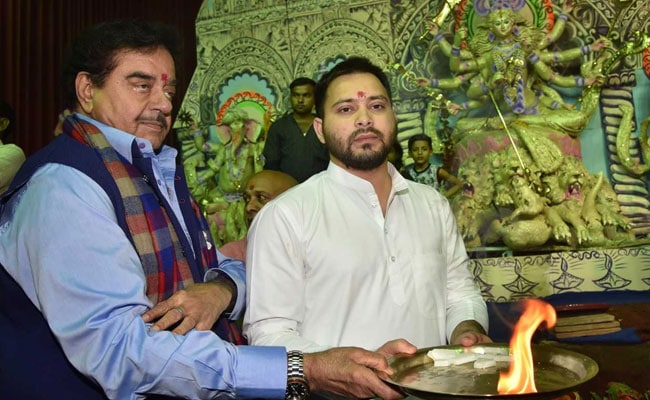 Given how dissident BJP leader Shatrughan Sinha has been criticising Prime Minister Narendra Modi and party president Amit Shah, it seems reasonably clear that the party will not give him a ticket in the Lok Sabha elections next year. The suspense still remains on whether any other party will field him from Patna Sahib, the seat he won from in 2009 and 2014.

Providing a hint about where he might be headed, the actor-turned-politician visited a Durga Puja pandal in Patna's Dak Bungalow Road on Tuesday accompanied by Bihar's leader of the opposition - Tejashwi Yadav of the Rashtriya Janata Dal.

After offering prayers, Mr Sinha put tilak (vermillion) on Mr Yadav's forehead and said that he has performed his "Rajyabhishek (coronation)". He said that Tejashwi Yadav has "the capability, power and devotion to lead Bihar".

He also wished Mr Yadav victory in all his battles.

While Mr Sinha said that there's nothing political about visiting a puja pandal, he didn't fail to take a dig at the Narendra Modi government at the centre.

The former actor also sang the first few lines of the film song "Ab tumhare hawale watan saathiyo" (the country is in your hands) and urged Tejashwi Yadav to march forward.

He further said that he has always been a good friend of Rashtriya Janata Dal president Lalu Yadav, jailed for fodder scam.

Expressing his gratitude to the former actor, Mr Yadav said, "He's like my guardian. He has stood by us in difficult times. I didn't want to lose the opportunity of seeing Durga Puja festivities with him."

"The situation may be different, location will be the same - Patna Sahib," he has been saying.