Shaheen Bagh: On both ends of the protest site, there are heavy traffic blockades. But has the administration been excessive in the traffic blocks and diversions, and is it deliberate?

Shaheen Bagh: Protesters against the CAA have dug in at the locality in south Delhi for months

The protests at Delhi's Shaheen Bagh against the citizenship law and the National Register for Citizens (NRC), which became one of the rallying points during the bitter Delhi election campaign, complete two months tomorrow. Hundreds of women and children have been on a protest sit-in since December 15 on a vital road that connects Delhi to Noida in neighbouring Uttar Pradesh. Hearing a petition on the traffic chaos because of the protest, the Supreme Court said earlier this week: "You cannot block a public road indefinitely."

On both ends of the protest site, there are heavy traffic blockades. But has the administration been excessive in the traffic blocks and diversions, and is it deliberate?

NDTV attempted to tackle the blockade from both sides, in Noida and in Delhi's Sarita Vihar. There are five blockades around a protest that covers only a 150-metre stretch on a single carriageway connecting Noida and Delhi.

Our first encounter with barricades was well inside Noida. Roads were closed on the flyover at a point that was two kilometres from the protest site.

Apart from cutting off Shaheen Bagh for traffic, this blockade cuts off an important access road from Jamia, Kalindi Kunj and an alternate route to go to Faridabad - all of which have nothing to do with the Shaheen Bagh protest and are at a distance where traffic can be easily allowed. 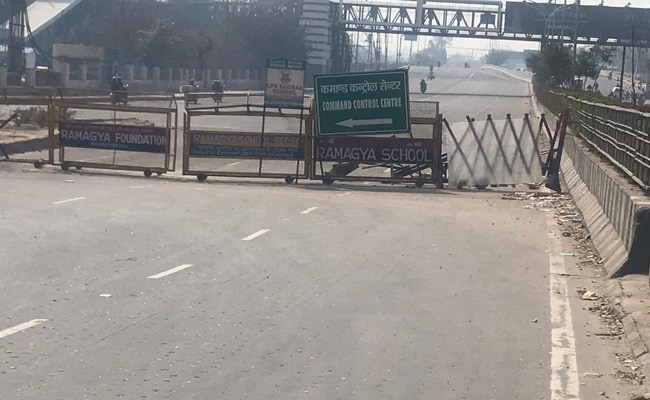 On both ends of the protest site, there are heavy traffic blockades.

On camera, the policeman on duty asked us to get in touch with his "seniors". Senior Noida police officers, on the condition of anonymity, admitted that requests for this excess blockade came from the Delhi Police.

"They said more than the protest site, they want to avoid traffic chaos around Kalindi Kunj (a south Delhi residential area). Which is why they have urged us to stop all traffic from the UP entry point," a Noida police officer said.

We decided to take the diversion and head to the traffic restrictions on the other side. After crossing the DND flyway, Ashram and hitting the Mathura Road - a popular route connecting Noida and Delhi -- we reached the GD Birla road on which the Shaheen Bagh protesters sit every day.

Interestingly, on the Delhi side, the blockade is minimal - from the point of the blockade, the protest site is only 500-800 metres away.

It is on this side of the barricade where Kapil Gujjar fired shots in the air as he attempted to approach the protestors.

Policemen stationed here said unless there's an emergency, no vehicles would be allowed through. Ambulances, school vans and fire engines are exceptions.

The protestors allege that the excessive barricades are not an administrative but a political decision - to demonise the protest - by the Delhi Police, which reports to the Union Home Ministry led by Amit Shah.

"We have repeatedly suggested to the cops how to divert traffic for those who want to go to Faridabad. And for those who want to travel to Sarita Vihar and Mathura Road. There have been various discussions on opening one part of the GD Birla Road. But the police have always turned down all these requests," Saleem, a member of the Shaheen Bagh Resident's Welfare Association, told NDTV.

"The design is pretty clear. They want to project us as the villains. They want people to think that we are responsible for the massive traffic diversions even though our protest is limited to this site. They want all commuters to curse us and hate us for raising our voice against CAA (Citizenship Amendment Act) and NRC (National Register for Citizens)," a protestor at Shaheen Bagh said.

NDTV reached out to at least five senior Delhi Police officers for a comment, but there has been no response till now.

The petition seeking to remove the Shaheen Bagh protests to clear up traffic comes up for hearing in the Supreme Court next week.