The weather department has forecast heavy to very heavy rainfall for Goa in the next 24 hours. 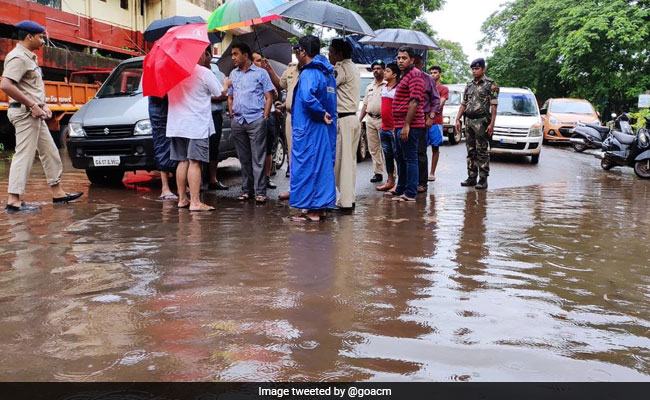 Goa has been witnessing heavy rain since a week.

Normal life has been thrown out of gear in Goa after heavy rain for over a week. Several people were stranded at Diwar Island near Panaji due to flooding in the area. Eight buses were stuck near Goa's border with Karnataka due to the heavy rain.

A local who was stranded at the Diwar Island, posted a video on social media of some water-logged homes on the island. Goa Water Resources Minister Filipe Neri Rodrigues took note and assured people of all possible help.

In the video, Manohar Bhomkar said due to breach in the embankment of a nearby river, water gushed into their homes. "There is flood everywhere. We have been stranded for four days," he said in the video.

Diwar Island is located across the Mandovi river near Panaji. Its residents have to use boats to reach the state capital and other places. After heavy rain the state river navigation department suspended the ferry service to the Island.

About eight buses carrying several passengers were stranded on the Goa-Karnataka border since Monday night due to flooding in the area after heavy rain, an official in the Chief Minister's Office (CMO) said.

Chief Minister Pramod Sawant instructed the officials concerned to rush to Radhanagari village on the state border with Karnataka to rescue the stranded passengers, he said.

"Our teams have rushed to the spot with water and food for the stranded passengers," the official added.

Mr Sawant conducted a survey of flooded villages in low-lying areas of North Goa and parts of the state capital Panaji. He said he would be meet officials to check the monsoon forecast for Wednesday.

The weather department has forecast heavy to very heavy rainfall in both North Goa and South Goa in the next 24 hours and issued an ''orange alert''.

Fishermen have been advised not to venture into the sea due to the rough weather, though the fisheries department lifted the ban on fishing in the state from August 1.