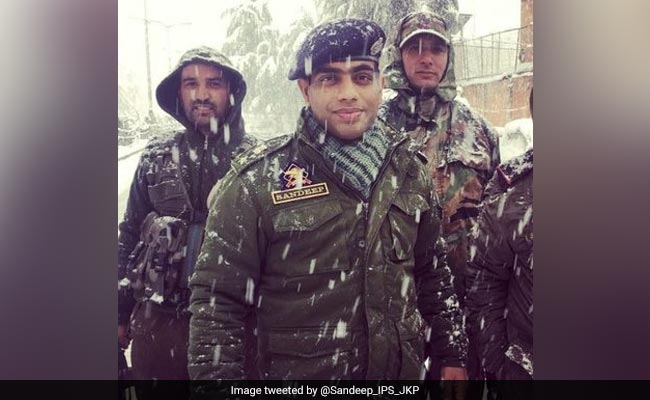 Jammu: Taking time out from his busy schedule, a young IPS officer is dedicating two hours every morning to help students in their studies, a move which has brought smiles to candidates preparing for competitive examinations but are unable to meet the expenses of quality coaching.

The 2012-batch Indian Police Service officer of Jammu and Kashmir cadre initially started with free coaching from his office chamber for 10 candidates who aspire to become sub-inspectors in the state police, the examination for which is scheduled later this month.

However, the number grew within a few days to more than 150 students preparing for various examinations, including civil services, staff selection commission and in banking sector, forcing Mr Chaudhary to look for an alternative arrangement.

Mr Chaudhary then shifted his class to a private community centre near his office along the Jammu airport road after the owner voluntarily offered his support for the initiative.

"I was discussing the upcoming examination for the post of sub-inspector with my colleagues when the idea to start free coaching for aspiring students came to my mind... Each day, the number of students is growing and the brighter part of the initiative is that more than 25 girls are coming for the classes," Mr Chaudhary told PTI.

Mr Chaudhary, from Punjab, started the initiative on May 30 from his office chamber, shifted to the new class on June 1, and will continue until June 23, a day before the scheduled date of the examination for sub-inspectors.

Mr Chaudhary shared his story with the students. He said he never went to a college for higher education or a coaching centre to crack the Union Public Service Commission examination.

"I did my BA and MA from Indira Gandhi National Open University. I joined Panjab University for regular course in journalism for about three months but then I dropped out due to circumstances and joined MA in public administration from IGNOU. I completed my education through correspondence - which was not very costly but I was guided at every stage, even during UPSC preparation, by friends and seniors," he said, making a point to the students that costly coaching is not essential to achieving their goals.

Wearing his uniform but limping due to a ligament tear, the officer is making every effort to turn his class lively and his students are ecstatic for being a part of his initiative.

Preeti, who is aspiring to become a sub-inspector in the police, said she is lucky to join the coaching as "her outlook towards the police changed altogether after coming here".

"I was not sure about the fairness of the selection process and seeing the dedication and devotion of this officer, I was having a wrong notion," she said.

She said preparing under the guidance of an IPS officer is something that cannot be achieved at any coaching centre.

"The youth of Jammu especially from the rural background lack exposure. They are going through their books but lack general outlook of the world outside. I am keeping this thing in mind while preparing the students," Mr Chaudhary said.

He said the students have come from varied backgrounds and far off places.

"By teaching them for free, I am not only helping them save money and help them in building their career but had achieved a unique satisfaction for myself. I have learnt like this and hopefully after they achieved heights in life, I am sure they too will come forward and extend a helping hand to someone," he said.

The officer, credited with great successes in his drive against the menace of drugs and criminal activities since his posting in February last year, said he is investing in citizens of tomorrow.

"The concept of community policing brought us closer to people. We are visiting schools and colleges delivering lectures, mostly related to the menace of drugs, besides organising meetings with senior citizens to ensure safe society. Mine is altogether a different initiative and is supported by my seniors including SSP, IGP and DGP," he said.

Police stations under Mr Chaudhary's command have registered more than 220 FIRs under Narcotic Drugs and Psychotropic Substances Act since his posting in February last year. These included 70 cases in the first five months this year.

"My effort is that I am investing in the youth and I am sure they will reciprocate positively for the betterment of society," he said.

Mr Chaudhary said the Jammu and Kashmir Police has sacrificed so much and it shows in its seriousness towards the betterment of society.

He said he is a firm believer in democratising education.

"The country has different types of education system and the people from the humble background had to face a lot of difficulty at the competitive stage," he said.

The officer said his seniors are not only encouraging him but have also assured him of complete support.

"My appeal to parents is always to give their children time and do not show their love only through money. They need time and guidance," he said.

Amit Singh from Bakshi Nagar area of Jammu city said he has undergone training at various centres but it is different here. "He (Chaudhary) is not here for money. He is lecturing and seeking immediate feedback. I am sure it will help a lot of us to crack the examination," he said.

Promoted
Listen to the latest songs, only on JioSaavn.com
Digvijay Singh Jamwal, another student aspiring to clear the civil services examination, said he has had a good experience as the initiative provided them a platform.