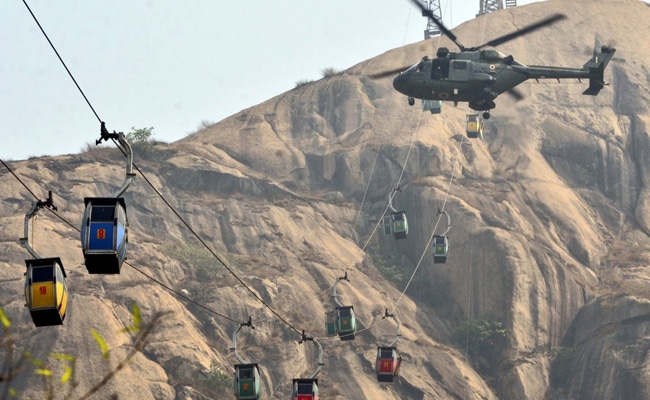 3 died in the Jharkhand ropeway incident; the rest have been rescued (PTI)

Ramdeo Pujhar, 22, was among those Paharia tribals who rescued eight tourists from two cable cars following an accident on a ropeway in Trikut hills in Jharkhand's Deoghar district.

Mr Pujhar, a member of the Paharia Particularly Vulnerable Tribal Group, or PVTG, heard a loud thud around 4 pm on Sunday and screams of passengers crying for help. He, along with two others, broke open the trolleys and rescued the eight, who were injured.

"I heard a loud thud. The ropeway was shaking violently and the passengers were screaming. I rushed to the direction of the sound. I found panic-stricken people, including two girls, screaming inside the trolleys," he said.

One of the trolleys hit a rock on the ground, while the other was hanging six feet above. Mr Pujhar and the others used a chair to reach the passengers and then broke open the cable cars to rescue them.

Mr Pujhar said that on hearing the screams, more Paharias from Sisanuthar village in the foothills of Trikut hills rushed to the spot. They informed officials and police and took the injured people to hospital.

"People in all the villages in the area are praying for speedy recovery of the injured," Mr Pujhar said.

Three people have died in the incident, including two after falling during the rescue operation. All the tourists have been evacuated.

Mr Pujhar said he was working as a cleaner in the Damodar Ropeway and Infra Limited (DRIL), which operated the system, and was not regularly getting his paltry monthly salary of Rs 3,000.

Maheshwar Singh, 50, another member of the Paharia tribe, said panic has gripped the area after the incident and he would never take a ropeway ride.

Case Filed Against 12 Over Ragging Junior In College In Assam